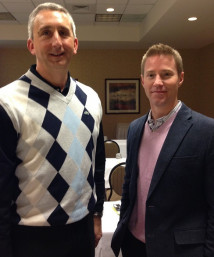 Although they have been with Safeguard for seven and six years, respectively, J.J. Sorrenti (left) and Scott Sutton point out that they are “newbies” compared to many other individuals who have worked at
Safeguard for decades.

Many franchisors measure their success by the number of “franchisee failures” they have. That is a really hard statistic to think about, admits J.J. Sorrenti, president of Dallas-based Safeguard Business Systems. “You can say, ‘Our failure rate is 1%,’ but if you have 5,000 units, that’s still a lot of individuals who have gone through a significant failure. Even for one person ... it could ruin their life.”

It’s clear that Safeguard, which became part of Deluxe Corp. in 2004, is keeping that number in check. “I am proud to say, in the last seven and a half years, we haven’t had one franchisee failure,” Sorrenti continues.

However, he is quick to note that the members of his printing firm’s franchise network are not called franchisees. “We call them ‘distributors’ because that’s what our founder called them in 1956 and the name stuck.”

Sixty years ago, Vincent G. “Buck” Bell — who retired as a sergeant in Gen. George S. Patton’s famous Third Army in World War II — launched a company in Philadelphia to distribute One-Write checks. This popular accounting system, which Safeguard still sells today, is “like an old-school version of QuickBooks,” Sorrenti quips. When a check is written within this binder, certain fields are carbon copied onto a ledger below. The user tears out the check, mails it and takes the ledger to his accountant.

Today, Safeguard’s network has grown to more than 300 offices throughout the United States and Canada, and distributors are offering more than just One-Write systems. While the firm still provides old-fashioned printed forms, checks and labels, its offerings have expanded greatly to include promotional products, direct mail services, Web and email marketing, search engine optimization (SEO) and search engine marketing (SEM).

One product that keeps Safeguard germane to the electronic era, yet still draws on its payment-based roots, is eChecks. Created and now owned by Deluxe Corp., the eChecks service allows a business to pay its vendors via email. “So it’s taking the same acumen, the same skill, the same background we have in a key area on the check side, and using technology to help make us more relevant and help business owners be more efficient,” Sorrenti explains. 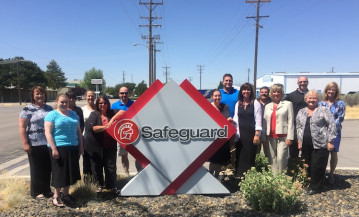 Safeguard by IBF, a distributorship located in Boise, Idaho,
received an honorable mention in the micro-employers category of the "2016 Best Places to Work in Idaho" awards program.

Those customers run the gamut. Although Safeguard works with large-scale clients — such as Costco, Metro PCS and U.S. Bank — its niche is serving small, local businesses whose owners share the same entrepreneurial spirit that Safeguard distributors possess.

Sorrenti has been with the company for nearly eight years, and he comes to Safeguard steeped in the franchise model. For 15 years, he was senior VP and GM of GNC Franchising, the chain of General Nutrition Centers.

At business meetings, Sorrenti often refers to “the infamous five-legged stool.” “Sometimes, I talk about it to the point where people make fun of me. They say it’s a carpenter’s worst nightmare.” But this stool, he contends, is essential to keeping Safeguard bullet-proof.

Most businesses are made from a four-legged stool. But having a franchisee creates an important fifth leg. “We have the customer, the franchisee/distributor, the vendor, our employees and our stakeholders. You need to keep all five of those legs balanced as best as you can so you can sit on the stool for a long, long time.”

Being a wholly owned subsidiary of a $1.8 billion, publicly held company has its advantages. Deluxe Corp. is based in Shore-view, Minn., about 1,000 miles away from the Safeguard headquarters in Dallas. “As part of Deluxe, we own specific solutions that our distributors can leverage, such as Vertical Response, an email provider; Orange Soda, which provides SEO and SEM services; and a Web hosting company called Hostopia.” In fact, Sorrenti points out that Deluxe recently acquired a company called DataMyx, and they’re exploring how Safeguard can leverage its strengths.

“We offer a plethora of marketing services and digital solutions, and we have the experts because we own the businesses,” Sorrenti points out. In addition to its distributors, Safeguard runs nine company-owned locations and also maintains a facility in Lansdale, Pa.

“We got started on the company-operated side in late 2012,” explains Scott Sutton, VP of acquisition and development. “We found that you gain a lot of good insight when you’re on the ground operating the businesses that you’ve traditionally supported.” But, by and large, the vast majority of Safeguard’s go-to-market strategy is through independently owned and operated distributor locations. 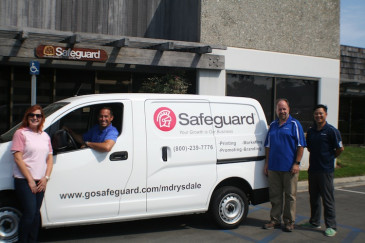 Michael Drysdale’s Safeguard distributorship in Costa Mesa, Calif., purchased a well-decorated delivery van to fulfill orders and to increase visibility in the local community that it serves.

“We remove a lot of the administrative and back-office tasks away from the distributor,” Sutton adds. “We’re the ones sourcing the products from vendors and manufacturing them in our own facilities. We also invoice the customer and collect the money, so our distributors can do what they do best: focus on the needs of the customers.” Safeguard also provides marketing and training support for its distributors.

“The good news for us,” Sutton explains, “is that a lot of the competing businesses are run by folks who are ready to retire. We’ve been able to provide them with a great opportunity to exit the industry and, in return, we acquire that business and sell it to an existing or new Safeguard distributor so they can grow.”

Sutton wants to bust the myth that M&As must be done with a “slash-and-burn” mindset. He sees it as a merger of equals. “This means that businesses are bought or absorbed — not because they are broken — but because they are thriving and leaving their mark in a key targeted segment of the marketplace,” he clarifies.

“Our distributors and the brand are our most important assets,” Sutton adds. “You don’t maintain a strong brand, a 60-year track record, without solid, world-class individuals.”