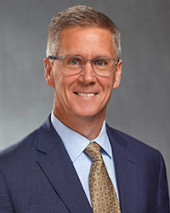 “I am pleased to report that in 2018 we achieved our second consecutive year of improved organic sales performance and our highest annual organic sales growth since 2014. With both our Business Services and Marketing Solutions segments delivering organic growth for the year, we are demonstrating our unique ability to provide solutions to help our clients improve customer engagement and drive business performance. Throughout the year, we took significant steps to position RRD for the future, including realigning our organizational structure, executing significant cost reduction initiatives and repositioning our balance sheet in support of our strategic priorities. I am also excited that we concluded the year with a $115 million contract award for the 2020 U.S. Census work,” said Dan Knotts, president and CEO. “As we look to 2019, we have a solid client opportunity pipeline and our teams are aggressively implementing plans to address the inflationary cost headwinds that we expect to face throughout the year. We also plan to increase our investments in critical strategic initiatives, including new client implementations, as we continue to execute our strategy and further establish RRD’s position as a leading provider of marketing and business communications.”

Net sales in the quarter were $1.76 billion, down $162.4 million or 8.4% from the fourth quarter of 2017, including a $119.5 million impact from the July 2018 disposition of the Print Logistics business. On an organic basis, consolidated net sales decreased 1.2% primarily driven by lower volume, including the planned exit of low margin sourcing business, and modest price pressure in the Business Services segment.

Non-GAAP adjusted income from operations of $107.0 million, or 6.1% of net sales, decreased $1.2 million from $108.2 million, or 5.6% of net sales, reported in the prior year period which included Print Logistics. Productivity improvements and favorable changes in foreign exchange rates of approximately $8 million were offset by volume and price declines as well as inflationary cost increases.

The Company provides its full year guidance as follows: 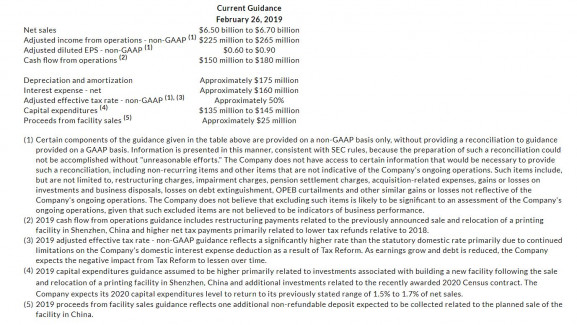 END_OF_DOCUMENT_TOKEN_TO_BE_REPLACED
Happening Today
The Powerful Case for US Book Manufacturing