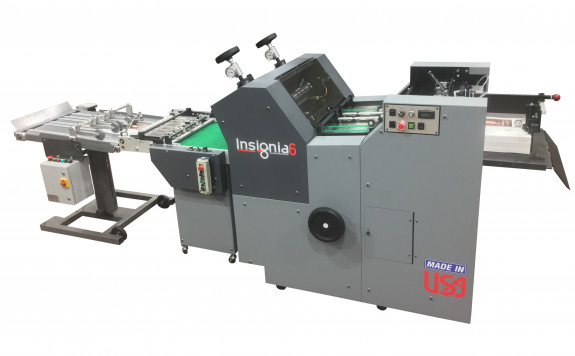 The Insignia6 from Rollem International.

ANAHEIM, Calif. - February 20, 2018 - Rollem International’s Insignia Diecutting Division has announced some recent installations of its Insignia sheetfed Flexo-Magnetic diecutters. The line is currently offered in three sizes to meet the specific press needs of printers, with a forth model, the InsigniaX3, soon to be released. The InsigniaX3 is designed to handle heavier weight stocks up to a 30-pt. thickness.

Here are some of the new installations across the U.S.:

Pro Print of Duluth, Minn., has grown to be the largest commercial printer in northern Minnesota. The company has installed an Insignia6 20x20” capacity diecutter. ProPrint uses its IS6 Dual mag machine for various size pocket folders along with other miscellaneous diecut jobs. It cuts, scores, and strips all its jobs with the IS6. The 20x20” sheet size enables maximum utilization of sheet imposition with the ability to feed sheets either portrait or landscape into the diecutter.

Michigan City Paper Box in Michigan City, Ind., has been committed to manufacturing the highest quality retail packaging products since 1904. This company received installation of the Insignia6 dual magnetic machine to diecut and score.

Consolidated printing, Van Buren, Ark., one of North America’s leading ticket manufacturers - whose clients includes some of the world’s most renowned names in the sports and entertainment industries - received installation of an Insignia7 diecutter. Insignia will support Consolidated in diecutting and creating ticket products that are as superb and as inspiring as the clients they serve.

MSI Litho in San Rafael, Calif., installed the Insignia7, the largest in the Insignia series with a 30x24” sheet capacity. MSI Litho is a digital and offset commercial printer utilizing the IS7 for custom and standard applications including keg toppers and presentation folders, just to name a few.