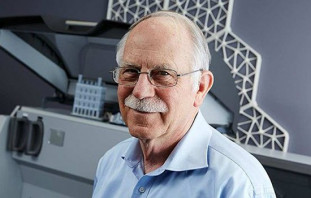 Charles Hull, co-founder and chief technology officer of 3D Systems, is the recipient of RIT's Melbert B. Cary Jr. Award.

ROCHESTER, N.Y. — April 20, 2016 — Rochester Institute of Technology’s College of Imaging Arts and Sciences will present its prestigious Melbert B. Cary Jr. Award to Charles Hull, the co-founder and chief technology officer of 3D Systems who is widely considered “the father of 3D printing.”

Hull will accept the award during a dinner beginning at 5:30 p.m. Thursday, April 21, at RIT’s University Gallery after touring 3D printing and research centers on the Henrietta campus earlier in the day with faculty and students.

The Melbert B. Cary Jr. Award is presented to those who have distinguished themselves in the advancement of technology in graphic communications and related industries. Among those industries are 3D printing and additive manufacturing, as demonstrated by the new AMPrint Center for Advanced Technology which the university will unveil later this year. The center, which will be housed in a 3,200-square-foot space in RIT’s Institute Hall, is made possible by a public-private partnership which includes financial commitments from New York state and Xerox Corp.

Hull is the inventor of the solid imaging process known as stereolithography, the first commercial 3D printing technology. With the founding of 3D Systems in 1986, he initiated the 3D printing industry and continues to lead it today with cutting-edge innovations ranging from state-of-the-art production 3D printers to the creation of the STL file—the first format that enabled CAD software to send print commands to a 3D printer—changing the game in manufacturing.

A named inventor on 85 U.S. patents, plus numerous other patents around the world in the fields of ion optics and 3D printing, Hull was inducted into the National Inventors Hall of Fame at the United States Patent and Trademark Office in 2014 for his globally impactful and transformative work inventing and pioneering 3D printing. That same year, he was the recipient of the European Patent Office’s prestigious European Inventor Award in the non-European countries category for his contributions to technological progress and the advancement of society. Hull also received The Economist’s prestigious 2013 Innovation Award, recognizing significant contributions across the fields of science and technology.

Prior to founding 3D Systems, Hull served six years as vice president of engineering at UVP Inc. in San Gabriel, Calif., a systems manufacturing company. Before that he spent a decade as an engineering manager at DuPont’s Photo Products Division, concentrating on the development of analytical equipment for chemists, including mass spectrometer and GC/MS systems. Earlier in his career, he was a senior engineer at Bell & Howell. Hull received a Bachelor of Science in engineering physics from the University of Colorado in 1961 and an honorary doctorate in engineering from Loughborough University in the U.K. in 2005.

The prestigious Cary Award is named in honor of Melbert B. Cary Jr., whose lifelong love and support of the graphic arts inspired others.

RIT’s recognition of Hull is yet another example of the university’s growing commitment to additive manufacturing and 3D printing by the university and its partners. Its AMPrint Center, a consortium of university-corporate-government partners focused on developing 3D printing and additive manufacturing technologies, will have functional 3D printing and fusing equipment such as 3D printers, direct-write printing equipment, analog printing and surface metrology technologies. Also included will be wet-chemistry infrastructure necessary to synthesize printable nano-materials. Additional office and collaboration spaces will be constructed, and room for program growth and research in emerging technologies will be available.

The Center was established in 2015 through a grant from Empire State Development and in partnership with Xerox to focus on developing applications in the 3D printing and advanced manufacturing industry, one of the key economic drivers for the Finger Lakes region and New York state.

The AMPrint Center is one of 15 Center for Advanced Technology announced by the state to support university-industry technology transfer.

Additionally, RIT received a $500,000 grant from the state’s Higher Education Capital Matching Grant Program to support the center. The program, administered by the Dormitory Authority, funds renovation or construction of critical academic facilities and high tech projects at universities across the state.

Preparing Yourself to Pivot with Inkjet
Comments
COVID-19 Resource Channel