ROCHESTER, N.Y.—February 8, 2016—Rochester Institute of Technology has received a $500,000 grant from the state’s Higher Education Capital Matching Grant Program that will be used to support the university’s AMPrint Center for Advanced Technology.

The grant was among 29 grants totaling $35.3 million statewide announced yesterday by Governor Andrew M. Cuomo. The program, administered by the Dormitory Authority, funds renovation or construction of critical academic facilities and high tech projects at universities across the state. 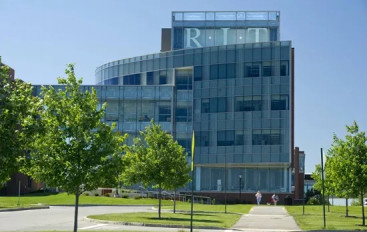 The grant will be used for construction inside the fourth floor of RIT's Institute Hall.

RIT will use the grant for construction inside the fourth floor of Institute Hall, which will be home for the new center, a research facility developing next-generation 3D print materials and applications, a growing industry regionally and in the U.S. today.

"RIT thanks Gov. Cuomo, our elected officials and the state Dormitory Authority, administrators of the grant program for this funding,” said RIT President Bill Destler. “Our new AMPrint center will help RIT serve as a focal point for applied teaching, research and development in additive manufacturing applications by bringing together expertise from a regional 'eco-system' of organizations from academia, government and corporations.”

State officials said they were pleased to see RIT receive the funding.

“I would like to congratulate President Destler and RIT on receiving a $500,000 grant from the State of New York for renovations to the fourth floor of Institute Hall,” said State Senator Joseph Robach, R-Greece. “These funds will help to ensure that Institute Hall maintains a state-of-the-art center for RIT students of today and tomorrow to learn and prepare themselves for the future in this important field.”

Sen. Patrick M. Gallivan, R-Elma, said, “The state’s investment in RIT and other colleges and universities will help our students reach their full potential and allow them to succeed in the global economy. This program is an example of public-private partnerships at their best.”

Assembly Leader Joseph D. Morelle, D-Irondequot, added, “As one of the finest universities in the nation this vital investment will help ensure that RIT can continue attracting the best and brightest young minds. Higher education is a pillar of our regional economy and this funding recognizes that important role. I am grateful for RIT's continued leadership in our community and I congratulate them for securing this significant award.”

And Assemblyman Harry Bronson, D-Rochester, also commented, "Congratulations to RIT for receiving a $500,000 state HeCAP grant that will be used to advance the RIT AMPrint Center. Rewriting the definition of 3D printing, RIT continues its lead in high-level technology research and development of the fast emerging 3D printing industry. This is an exemplary academic-industry-government partnership that will continue RIT’s leadership in this industry.”

Denis Cormier, an expert in 3D print technologies, is director of RIT’s AMPrint Center and the Earl W. Brinkman Professor in RIT’s Kate Gleason College of Engineering. A professor of industrial engineering, his research focus is in printed electronics, specifically the synthesis of printable nano-inks, the development or enhancement of printing processes, and the design of novel printed electronic devices.

The center will serve as both a research and teaching facility for the university’s students as well as its corporate partners, and housed in a 3,200-square-foot space in RIT’s Institute Hall. Researchers will have access to functional 3D printing and fusing equipment, direct-write printing equipment, analog printing and surface metrology technologies. Also included will be wet-chemistry infrastructure necessary to synthesize printable nano-materials.

“These colleges and universities are major employers that help drive the New York State economy and provide critical education to the next generation,” noted Gerrard P. Bushnell, president and CEO of the Dormitory Authority in a statement. “The Higher Education Capital Matching Grant Program leverages private investment with public dollars to stimulate the economy and keep New York competitive.”

The AMPrint Center is one of 15 Centers for Advanced Technology funded by Empire State Development to support academic-corporate-government partnerships in growth industries such as 3D printing. Cormier was the original principal investigator for the Center and brought together university partners from Clarkson University and SUNY New Paltz with corporate partners that include Xerox, GE Research, Corning, Kodak and MakerBot, to design novel devices and develop next generation polymer, metal and composite technologies.