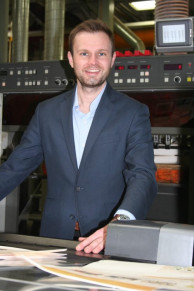 As a third-generation printer, 29-year-old Austin Meissner can remember coming to the shop as early as five years old, growing up in and around the business and seeing it evolve over time. His goal has always been to join the business and help grow his family’s legacy, but he wanted to make sure he had the right tools to bring value to the organization.

So after graduating from college, Meissner worked at another company outside the industry, gaining valuable experience that he was able to bring with him when he formally joined Color Ink in 2016.

Right now, he notes, his primary role is with sales and sourcing, working with vendors on items such as substrate purchases and procurement. He has also been getting more involved with operational planning over time, helping his father run the business.

“There is definitely going to be a handoff of president at some point,” says the younger Meissner, “when dad starts to retire. I don’t think he’ll retire full-stop, even in 5-10 years, so we’ll probably phase it in, and I will slowly assume more responsibility. I’m looking forward to it, but working with him is exciting, too.”

Color Ink has reinvented itself over the years, with a lot of changes in the equipment, technology, and even customer base. “We’ve gotten to the point where we’re almost 100% digital now,” says Meissner. “We have one sheetfed offset press left, but everything else, from print, to embellishment, to finishing, is digital. That’s pretty exciting — technology plays a big part for what we do as a company.”

The future of technology is also one of the things that excites him most, with everything from the evolution of digital printing, to developments like nanographic particles and digital embellishments that are profoundly changing what is possible with print. “There are design possibilities that just weren’t possible, even five years ago,” Meissner notes. “They were just too cost-prohibitive. But today we have the ability to offer quick turns on short- to mid-run lengths,” with a variety of custom finishing options such as foils, textured UV, cutting, and creasing on the menu.

He notes that opportunities such as short-run packaging and custom sales kits are now very much possible. “It lets designers get creative with things they couldn’t do 5-10 years ago, and that’s really exciting.”

For Meissner personally, however, one of the things he’s most proud of so far has been a complete overhaul of the safety culture at Color Ink, something he is very passionate about. “Not that safety wasn’t important, but when I came back to Color Ink, there wasn’t a focus on safety in the way I was used to,” he says. “I established it into a culture where everyone sees the benefits of safety.”

The result, he notes, is that downtime is at an industry low, and Color Ink now has a committee that meets monthly to audit the processes and take any corrective action needed. “That has really been the coolest thing that I’ve directly been a part of,” Meissner notes. “It is really, really important for a company, and I’m proud to have been a part of it.”

Meissner is motivated to help take his company to the next level, noting that “I don’t like when it’s the same every day — I like new challenges, and being involved in new things.”

That drive to keep learning, keep evolving, and keep pushing to stay ahead of the curve will not only help shape the next generation of Color Ink, but of other commercial print shops that strive to remain relevant alongside them. Meissner is living proof that change and innovation are the path forward to long-term growth and success.