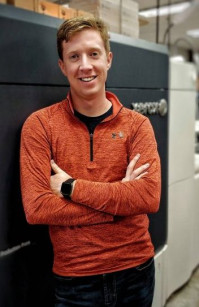 Adam Runyon didn’t grow up with printing ink in his blood, or a legacy of print to shape his view of the industry. Instead, he first got his introduction to this world when he got a job working for Office Depot, where he eventually worked his way up to print manager.

There, he led a team to print sales that surpassed his store’s capability to actually produce. That was how he met Jim Bright, the owner of a local AlphaGraphics franchise, who offered him a spot in his own organization.

“He offered me a job, and the rest just grew organically,” says Runyon, age 27. “I wasn’t originally interested in print. I always knew I wanted to deal with both people and technology, and it just seemed like a good combination of the two. Even today, that’s why I like print — there's a lot of human interaction, but also a lot of new technology and processes.”

Consultative, Not Just an Order Taker

Runyon hates the word “sales” and doesn’t see himself in that role — hence why sales is nowhere in his official title. He represents a new generation of consultative print salespeople, focusing instead on building relationships that go far beyond just taking orders.

“I am responsible for selling, managing, and growing key accounts,” he explains, “but I am more like a project manager or consultant — I almost like to say I’m more of a concierge. Customers give me their projects and the deadline, and then it is up to me to get it done, branded, shipped, etc.” He sees the job as more of a detailed customer service position than a true sales position.

But while that typically has not been the traditional way to approach print sales, it is paying off. Today, Runyon’s client base includes a large hospital chain with locations across the U.S., and he has led projects that included redesigning, creating, and installing signage for an entire four-story hospital.

“Adam has led our sales team through tremendous growth, with sales increases in double digits every year since he joined our team,” Lisa Glaser, marketing director for the location, points out. “He’s also one of the top performers in the entire AlphaGraphics franchise network, and continues to exceed every expectation.”

Looking forward, Runyon continues to be excited about the depth and breadth of possibility that print brings to the table, everything from business collateral for an office to 3D signage — whatever a client needs. But the challenge, he notes, is not getting too complacent.

“The biggest challenge in print — and even I had to fight this — is doing something one way just because that’s how it’s always been done. You get comfortable. But you have to be very fluid, and very willing to try new things and new equipment. The old way of selling doesn’t work in this industry anymore — it’s a very different world. Print needs to be looked at as more of a custom project, as a statement instead of an old-fashioned commodity.”

Runyon sees a future in very unique projects, with him continuing to serve as a hub to help customers solve problems. In fact, his mantra is “serve people well,” which is a philosophy that will only continue to shape his own career, as well as the way printing is sold across the industry.

Strength in the Middle

No News Is the Worst News