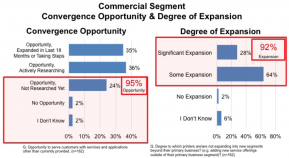 It’s always been difficult to come up with a universal definition for “commercial printing.” Two printing businesses can basically be producing the same types of products - and one might identify itself as being a commercial printer; while a similar shop might call itself a job shop, a marketing services provider, a quick printer or one of several other descriptors.

The definition of commercial printing is blurring further as establishments continue to expand beyond their traditional product applications into different types of printing, such as wide-format signage, banners, graphics and POP/POS displays; label, folding carton, corrugated and flexible package printing; direct-to-garment printing; industrial printing and much more. Key drivers for this convergence into new market segments include the promise of better margins, reduced competition and the desire to create more “stickiness” with customers to avoid the commodity stigma that has dogged the general commercial printing market.

A new report, which was commissioned by the Specialty Graphic Imaging Association (SGIA), was recently completed by NAPCO Research to define and analyze the degree of convergence that is occurring between various printing industry segments. The goal was to determine where printing businesses have already successfully experienced - and are projecting the most opportunity for - expansion beyond their primary product and service offerings. 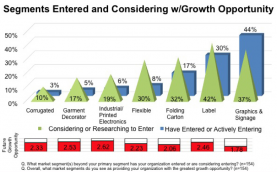 Based on the survey results, a whopping 95% of the commercial printer survey respondents see an opportunity to serve existing and new clientele with a range of applications and services that extend beyond their primary offerings. Among them, 35% have already expanded into new offerings within the past 18 months, 36% are actively researching new markets that they plan to enter, and 24% realize that the opportunity exists, but they have not yet begun the research to determine what new segments they should expand into.

And, of that expansion into new print market segment and service offerings - which totaled 92% of all respondents - 28% of the commercial printer survey respondents described the degree of their initiative(s) as being a “significant expansion,” while 64% indicated “some expansion” was a more appropriate description of their current expansion efforts into new product segments.

Similarly, a variety of packaging applications were also cited as opportunities, but have not yet been expanded into by commercial printers. This can be attributed to the levels of difficulty, skill sets and equipment requirements for expansion into those respective packaging applications. For example, while flexible packaging is considered to be a segment with strong growth potential, entry requirements also remain much higher in comparison to label production. Based on the survey responses, a few other areas show low existing penetration, but strong consideration.

The results of this convergence as exemplified by the research study further reinforce the strong desire among printer respondents for a consolidated industry trade show event that enables them to address all of these market segments in a single venue.

As such, PRINTING United, taking place in Dallas from Oct. 23-25, 2019, will become the one-stop attendee destination for those seeking to educate and equip themselves with the kinds of integrated solutions that today’s print services providers need to offer if they want to remain competitive.

To learn more about how commercial printers already are, or are at least considering, venturing beyond their core competencies into adjacent print markets, click here to access the full report.