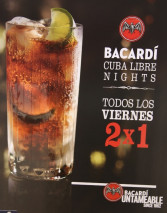 One such renowned player, Bacardi, the famous rum company, recently desired a distinctive poster to characterize and celebrate one of today’s most popular, historical, and celebrated mixed drinks. Bacardi’s bold, "Cuba Libre," (Spanish for "Free Cuba") is an internationally appreciated cocktail of rum, lime and Coca Cola that, in 1900, helped celebrate Cuban independence during the Spanish-American War. Bacardi, in a visual approach, wanted to figuratively and literally raise a bottle and a glass, to honor the advent of this legendary drink.

Hera VP Ricardo Garcia noted, "They [Bacardi] admired our four-color press processes, but the dimensional, Scodix finishing system brought them fully onboard. From the moment we installed the Scodix system into our printing plant, customer demand for its special finishing effects has continually ascended. Scodix has helped Hera surpass any print-industry competition by allowing the firm to offer award-winning products that were previously impossible to produce." 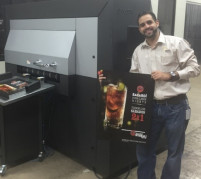 Bacardi’s executives provided a clear vision as to what they wanted to present. The legendary firm desired an image that was both traditional and progressive, liberating and breathtaking, in addition to rewarding and collectable. Bacardi’s design team chose Sappi Fine paper and Hera’s craftspersons processed the finished, CMYK-plus-one image on a Heidelberg press. The fifth separation was reserved for the Scodix digital enhancement process. In one, final pass, the Scodix addressable-printhead system applied the SENSE polymer to Bacardi’s designer selected areas.

"Bacardi’s beautiful poster became 3D," Garcia says. "The result was jaw-dropping." The Bacardi poster was a huge hit. Even better, it created a new advertising avenues for Bacardi. “We went from an attractive poster to collectible art — something that could only be achieved by Scodix processes."

A Glossy Future
The Scodix system, installed in Hera’s facility, has allowed the firm to develop new revenue streams. Further, it injected new dynamics into its sales portfolios, which in turn has inspired clients and designers to conceive new imaging concepts for folios, newsletters, catalogs, magazines, presentation cards, cut sheets and press kits.

"We’ve seen a definite increase in job volume," Garcia notes. "It’s so different that we refer to it as 'Hera 3D'." He adds that the feature’s affordable price tag further ignites client interest. "They can’t wait to use it." Less than a year later, Hera was so busy that they traded in their Scodix S75 system for the faster and wider format of the Scodix Ultra system.

Scodix offers the printing leader other advantages. For example, Hera no longer farms out such work as hot-foil stamping, embossing, lamination or other finishing embellishments. “It’s all done in-house, without need for additional hardware or software.” Garcia adds.

“We are so very grateful to all the Scodix Team, their support, especially Isaac Castiel [Scodix VP, Latin America] who has been instrumental to our success. They are a great business partner. Our operation has been liberated by this technology,” he notes, adding, "… perhaps someone should name a cocktail after Scodix."

About Hera Printing
Under the guidance of VP Ricardo Garcia, Hera is revered in its island and mainland markets for producing color printing, after-print finishing, and sought-after specialization projects. HERA Printing, in business since 1978, has strived since its inception to elevate the quality of printing to new standards year after year. Hiring the most qualified staff and investing in the most sophisticated equipment on the market, Hera offers customers superior work and rapid turnaround at competitive prices.

With a consistent focus upon the client’s quality needs, the firm constantly elevates their processes and capabilities through technology and craftsmanship, advanced over decades of training and dedication, with no limitation to the in-house and highly sought-after creative talents. Hera is proud to state that all printing and production is completed in their facilities in Puerto Rico and the company is supporting member of the Industry Association of Graphic Arts in Puerto Rico, the Foil Stamping & Embossing Association, and PIA (Printing Industry of America).

About Scodix
Scodix Ltd. is the established leader of digital print enhancement presses for the Graphic Arts industry, offering print service providers and converters the ability to add value to the products they provide to their customers. The company’s digital enhancement presses and Scodix SENSE solution offers high-quality enhancement capabilities that make the graphic communications' printed product stand out.