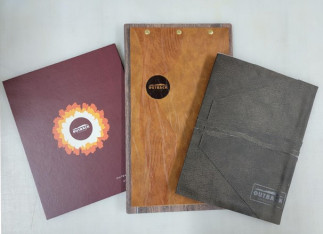 The printer only had three production days to produce eight copies each of three very different Outback Steakhouse menu prototypes.

The seven-person franchise printer was tasked with producing eight copies of three different menus in about two weeks for Outback Steakhouse: a hardcover paperboard book with interior soft-touch coatings and custom diecut pages meant to look like Outback Steakhouse’s signature appetizer — the Bloomin’ Onion; a multipage expedition journal booklet with a faux leather cover featuring a printed logo; and a stepped-page menu on reclaimed board with a leather-like cover flap.

That effort garnered the franchise shop a Marketing & Print brands “Project of the Year” award and cash prize, which was announced during the recent Alliance Franchise Brands convention in Minneapolis, Minnesota. 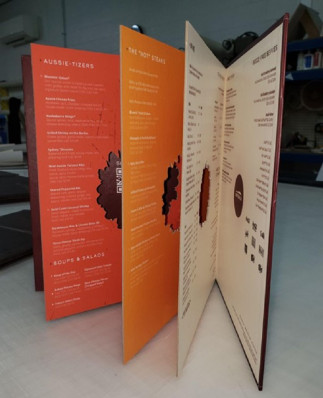 The hardcover book had a different diecut that got progressively smaller on each interior page.

“We probably started about a month before they needed them, from when they first reached out to us,” Mark Stovall, franchise owner, recalls. “And then things sort of moved quickly on their end [so that] by the time they had finalized the menus and sent print-ready files, we only had about three days to produce everything.”

The shop used its Colex CNC machine to achieve the diecut Bloomin' Onion page. For the reclaimed board, it deployed its EFI Pro 24F flatbed wide-format printer to create a grainy wooden texture on PVC plastic. The company’s HP Latex 365 wide-format printer was used on the vinyl for the hardcover books, and a Xerox Versant 180 digital press was used to complete the project.

If you ask Stovall, it was his shop’s background in signage that allowed the team to excel. “We are a dual-branded center; we do both signage and print,” he says. “We have just been an Allegra Print Center for going on five years now. So, the print side was kind of new to us, but we took a lot of our knowledge from signage to be able to produce what they needed.”

The printing and signage shop also bound the books in-house, used its own wrap material, and even created its own faux leather material using fabric from a local business in the Lexington area. To sum it up, Stovall and his team had to get very creative. 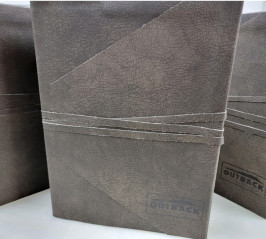 “We were able to piece things together on a very short timeline," Stovall says. "We ended up using our vehicle wrap vinyl in a matte black for them to get the soft-touch coating for some of the books and pages. Pulling everything together and delivering it to them at 10 a.m. on Saturday morning so they could ship them out was a challenge, but it was definitely worth it. Our team had fun doing it.”

The challenges of the Outback Steakhouse menu project were not for the faint of heart. Stovall notes that when he was on a Zoom meeting with the CEO of the client company, the executive admitted that they had dozens of print shops in mind, but Stovall’s operation was the only one willing to accept the challenge of the project or that gave him any sort of confidence that it could complete the task.

“It just shows how we’re running things here. It’s nice that we were able to grow and be recognized for this project,” Stovall concludes.