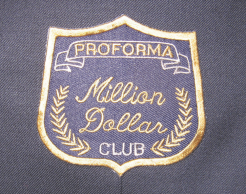 “At Proforma, our tagline is 'We Make Millionaires.' This accomplishment is proof that Proforma truly does make millionaires and also helps make our owners’ dreams come true,” noted Greg Muzzillo, founder of Proforma. “We are incredibly proud of this dedicated and hard-working group of owners.”

“Proforma has inspired the motivation and drive we’ve had this year to reach our goals and hit the $2 million mark,” remarked Steve Flaughers of 3rd Degree Marketing in Canton, Ohio, and one of the newest members of Proforma’s Multi-Million Dollar Club. “With Proforma, we’ve been able to position ourselves as full service providers while securing five acquisitions and adding six sales reps to our team. I’ve been able to take on complex projects involving website design, mobile app development and high volume orders with short deadlines. When I walk into a client meeting, I have full confidence that I can accept any project and deliver on the results with Proforma backing me. I am certain that with Proforma, I will soon advance to the Five Million Dollar Club and beyond.”

Proforma’s Million Dollar Club and Multi-Million Dollar Club include more than 100 members, with sales exceeding $30 million. These members and their spouses/significant others are invited on a three-day getaway to a world-class resort to enjoy networking with supplier partners and celebrating each other’s accomplishments. This year’s celebration will be held at the PGA National Resort and Spa in West Palm Beach, Florida, from March 31-April 3.

“As part of Proforma, we have the flexibility to manage and grow our business the way we want to while we tap into the significant resources of our franchise system,” explained Jim Shindler of Proforma Graphic Services in Columbus, Ohio, and one of the newest member of Proforma’s 10 Million Dollar Club. “We benefit from significant supplier partnerships and access to a very talented marketing and sales development team. With the help of knowledgeable business advisors and our financial strength we are able to win large national accounts, as well as successfully expand our business by adding proven sales professionals through mergers and acquisitions.”

About Proforma
With over 35 years of experience and $500 million in sales, Proforma remains clearly focused on its mission to help their owner’s dreams come true. Proforma’s tagline is “We Make Millionaires.” Only Proforma empowers its owners with a full array of both printing and promotional products, 160 support center associates, and four million dollars in sales and marketing programs, tools and support. Only Proforma has over 100 members in its prestigious Million Dollar Club and has a founder that built a 20 million dollar distributorship, assuring owners that only Proforma knows how to help them every step of the way. Proforma has received numerous awards and is recognized as one of the top two largest companies in its industry. Proforma serves approximately 60,000 clients through more than 750 member offices across the globe.