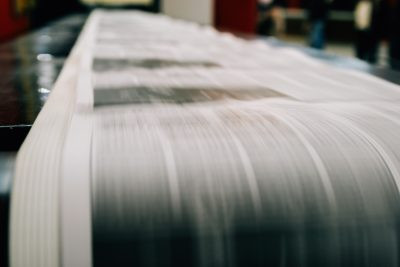 The iconic glass and copper glass building stretching two blocks that houses the Kansas City Star newspaper — which opened to much fanfare in 2006 as part of a $200 million investment, complete with the installation of brand-new web offset printing presses — has been sold. According to an article in the paper, printing of the newspaper will be outsourced to the Des Moines Register Star, a Gannett paper, effective the first quarter of 2021.

As a result, the Star reported that 68 full-time and 56 part-time production workers will lose their jobs. The presses in Kansas City had also printed local and national editions of several newspapers, including USA Today, The Wall Street Journal, and others.

Founded in 1880 and formerly owned by the Knight Ridder chain, the Star was acquired by the McClatchy Co. in 2006. McClatchy — which owns 30 newspapers, including The Miami Herald — filed for Chapter 11 bankruptcy in February. McClatchy was then purchased by hedge fund Chatham Asset Management in September for $312 million, the Star article indicated.

This latest newspaper printing shutdown and outsourcing agreement follows similar consolidation moves across the company that I reported on recently. These include the impending closure of the 674,000-sq.-ft. Philadelphia Inquirer printing plant, with nine press lines, located just outside of Philadelphia, which prints The Philadelphia Inquirer and Daily News, impacting more than 500 production workers. Those daily papers will be outsourced to another Gannett facility located in nearby Cherry Hill, N.J.

Similarly, News Corp plans to shift the production of print editions of The Wall Street Journal, Barron’s, and the New York Post to The New York Times’ College Point plant in Queens, N.Y., which also already prints Newsday, a daily newspaper serving Long Island. The relocation to the Queens operation by early next year will result in the closure of News Corp's 400,000-sq.-ft. printing facility in the Bronx, where the publications have been printed since 2001. The Bronx facility reportedly employs more than 500 workers.

Not only do these closures show the overall decline of printed newspapers to electronic alternatives in the U.S., they also are indicative of the decreased demand for commercial web offset printing jobs, which newspaper publishers had long gone after to help fill their idle press times.

Sales Growth Is on Horizon for Commercial Print

Are You Ready for In-Person Events?