Katherine O'Brien, who served as editor-in-chief of American Printer from 1997 to 2011 (a trade magazine founded in 1883 as Inland Printer), passed away Saturday, June 19, eventually succumbing to a 12-year battle with metastatic breast cancer. Those who knew Katherine — or KOB, as she liked to sign off as her unofficial signature — remember her for her sharp wit and humor, combined with top-notch writing and interviewing skills. Diagnosed with Stage IV breast cancer in 2009, through sheer determination and grit Katherine worked full-time for another five years before opting to pursue the next chapter of her life. She far-outlived the median survival rate of three years for a devastating disease that takes 40,000 lives per year. 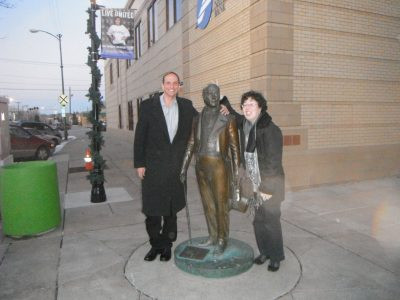 Katherine and I stand by a presidential statue in downtown Rapid City, S.D, during a Kodak junket to tour Fenske Media.

I had the privilege to know KOB over the course of many years attending press conferences and events, plant tours, and domestic and international trade shows together. While technically working for competitive publications, we bonded as fellow journalists right from the start — and our friendship soon became a personal one.

Although soft-spoken, when Katherine spoke, people listened — whether it was to hear her keen insight on a serious industry topic, or her sharp wit and cynicism that added some levity. And her written prose captured her sheer intelligence, insight, and ability to relay what was sometimes technical information in an easy-to-read, pragmatic manner.

And, while I admired Katherine for the excellent job she did as editor of American Printer, my admiration grew even stronger as I watched her battle endless rounds of debilitating treatments for incurable breast cancer with a sense of determination, dignity, and even matter-of-factness that perhaps her ability to document her illness would help raise greater public awareness of the disease, understanding of what patients go through, and advocacy for more R&D funding.

Katherine thrust herself into the cause by becoming a board member of the Metastatic Breast Cancer Network, chronicling the devastating disease by sharing the latest research; authoring real-life profiles of other individuals who battled it; and writing social media posts and musings, via Facebook as well as to her more more than 4,000 Twitter followers.

As Katherine's condition deteriorated rapidly, family members stayed with her around-the-clock at her apartment to help administer hospice services. A close-knit family with several siblings, her sister and twin brother sent out an email signaling that they would read any messages sent to Katherine before she passed. This was the email I sent her:

I am so sorry to hear that you aren't doing so well health-wise, but wanted to reach out to let you know how much I care about you. We certainly had some wonderful times together over the years, memories I will never forget. You have proven to be an inspiration to so many people, struggling with your illness with grace, strength, and dignity, along with a healthy dose of your one-of-a-kind Katherine O'Brien biting sense of wit and humor thrown into the mix.

You made many of the press conferences and industry events we attended so much more entertaining, and it was wonderful that our longtime friendship extended beyond a business friendship to a very close one. There certainly were many wonderful times we shared together. For example, I will never forget the late night of drinking in Germany with Lisa Cross, when we all crawled out onto the roof of the hotel, and the hotel guest in a room above opened his window and told us all to go to bed in broken English.

Katherine, I, like so many people, will always love you and will never forget the wonderful imprint you left on all those people who were lucky enough to get to know you. I will always cherish the times we had together and our friendship.

The outpouring from those in the printing industry who knew Katherine contained very similar sentiments and admiration. Here are just some of the comments I received from people who knew her after they learned of her passing:

Katherine O’Brien was a special person. I met her for the first time at Drupa 2000. She told me about her extended Irish family and about the letters her father wrote at Christmas time. Some of my RIT students and I collected them into a hardcover book with many family photos called “A Happy and Holy Christmas” which she distributed one Holiday season. I still have my copy.

She had a wry sense of humor. Once, at a tour of Radio City Music Hall, they described the dancing regimen. “It’s not Rockette science,” she commented.

I told her how proud we were of her work supporting women with breast cancer. “I’m proud of myself,” she responded. It was that inner strength that gave her life meaning and purpose. I am thankful that Katherine O’Brien was in my life.

— Frank Romano,  professor emeritus at RIT and founder of the Museum of Printing

Brilliant and possessed of a gift for understanding and insight as she was, Katherine O'Brien became a much-loved graphic arts-centered journalist soon after beginning her tenure with American Printer. It wasn't long before I realized that the graphic arts was fortunate to have somehow earned her attention, because Katherine could have chosen to do just about anything —and at minimum could have written about any profession, market or cause.

Katherine was a dedicated student of the industry, and I admired the seriousness with which she absorbed information. She was quiet and highly observant. I watched her in press conferences and in meetings, wondering if I could learn from her.

And then one day not long after we met, the woman I knew as "Katherine the Serious" greeted me at an event by looking me straight in the eye and saying just one sentence that captured perfectly the pure, organic comedy that lay at the heart of the interactions we were witnessing in that room. Katherine, the deceivingly quiet and seemingly shy former honor student, revealed herself to be not only a serious and excellent journalist, but also a hysterically funny satirist and comedian.

So many of us quickly fell in love with her, for her sharp, comedic wit; beautifully precise prose; and most of all, her genuine spirit. I can see that grin right now, as she assesses the room and all of our reactions, wheels turning as she drums up another one-liner.

Katherine and I developed a long friendship outside of work. We both loved traveling and visited several places together. We laughed a lot, often got lost, shared a love of Nutella with crepes, and enjoyed our drinks. She loved beer. Katherine was smart, curious, insightful, kind, and bitingly funny. She was also extremely humble. 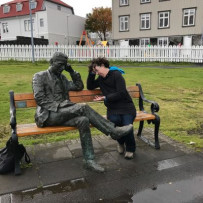 Katherine enjoyed her trip to Iceland.

Our last trip together was in Iceland three years ago. During one long drive she opened up about the hardships and loneliness of fighting her cancer, but she never succumbed to self-pity. Her bravery and strength left me in awe. I will miss my friend.

So very sad. She was an amazing/inspiring person and power of example. Through it all, she never lost her optimism, hope, or sense of humor — she one of the wittiest people I know. Also, she helped others suffering with the same diagnosis. The world became a darker place when her light left it.

At industry events when Katherine spoke, everyone listened. We purchased American Printer to bring a world-renowned industry journalist to our company. But what we really gained was a living-life to the fullest mentor.

Katherine retired to use her final years giving back as a patient advocate. Many metastatic breast cancer patients benefitted from her wisdom and attitude. The inspiration she provided so many will keep her memory and her spirit alive for many years.

Katherine’s reply to “it’s great to see you” was always “it is great to be seen.”

Katherine was the boldest person I have ever known in her situation, and she dedicated her time before death to educating the public about her disease. She wrote and served on committees for the cancer association long after she clearly deserved to relax and enjoy what little time she had. Katherine beat all the odds as she outlived every diagnostic prediction of her demise. If more people approached death the way she did the world would be a much better place.

She was a brilliant woman. Sitting in the press conferences over the years observing that she always asked great questions and also challenged people. Quick witted and a real pro. Sad ? day.

Katherine O'Brien was a low-key but high-intensity journalist whose curiosity, attention to detail, and passion for accuracy were models for all the rest of us in the printing trade media. Wherever things were happening in the printing industry, there you would find Katherine, nailing down the facts, cutting through the hype, and framing the story for her readers in exactly the right way. I'll miss her uncompromising professionalism, her sharp wit, and, as I remember so well from the many trade shows and press conferences we attended together, the gentle pleasure of her company. R.I.P.

Among so many great KOB memories, it was drupa 2008, upstairs in EFI’s booth, 97 degrees in the hall ... Katherine: "Holly is that you dripping?"

A visitation was held yesterday in Countryside, Ill., and a mass, which was livestreamed, was held at St. Francis Xavier Catholic Church in LaGrange this morning. Internment followed in Ascension Catholic Cemetery in Libertyville.

In lieu of flowers, the family suggested that donations be made in her name to the Robert H. Lurie Comprehensive Cancer Center of Northwestern University for Metastatic Breast Cancer Research.