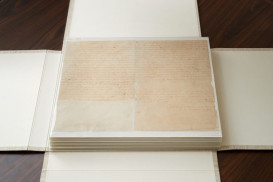 These are the first couple of pages of the printer's manuscript of the Book of Mormon. It is enclosed by folding the casing and then by sliding it into an additional case. | Credit: The Church of Jesus Christ of Latter-Day Saints by Intellectual Reserve Inc.

In 1830, Egbert (E.B.) Grandin of Palmyra, N.Y., used a printer's manuscript of the Book of Mormon to print 5,000 copies of the religious text on his newly installed Smith press manufactured by New York City-based R. Hoe & Co., according to Brigham Young University's Religious Studies Center. The order of 5,000 books would cost a whopping $3,000 and would be hand set and printed on the "state-of-art iron handpress." Now, more than 185 years later, the original dictated manuscript used to print the first 5,000 copies of the book has been sold to The Church of Jesus Christ of Latter-Day Saints for $35 million.

In 1903, the Independence, Mo.-based Community of Christ purchased a collection of documents for $2,500, which according to The Salt Lake City Tribune, included the printer's manuscript. Community of Christ remained the owner of the manuscript until earlier this month when it was sold to the Latter-Day Saints.

“We hold the Book of Mormon to be a sacred text like the Bible,” church historian Steven E. Snow said in a press release. “The printer’s manuscript is the earliest surviving copy of about 72% of the Book of Mormon text, as only about 28% of the earlier dictation copy survived decades of storage in a cornerstone in Nauvoo, Illinois.”

Brigham Young University's Religious Studies Center explained in the article, "From Gutenberg to Grandin: Tracing the Development of the Printing Press," that it took seven months to print the 5,000 copies of the book and that it would have required more than 1,000 pulls per day on the printing lever.

The Smith press had a platen of about 21x30˝. Sixteen pages were typeset and printed with each pull of the press lever. This meant that for a 592-page book with a run of 5,000 copies, approximately 2,960,000 pages had to be printed. In layman’s terms, the printing lever on this rugged Smith press would have been pulled at least 185,000 times during this seven-month period. It would have necessitated more than a thousand pulls per day.

According to The Huffington Post, David McKnight, director of the University of Pennsylvania’s Rare Book & Manuscript Library, confirmed that the $35 million amount is the highest ever paid for a manuscript. HuffPost reports that it surpasses what previously had been the most expensive manuscript ever purchased: Leonardo da Vinci's 16th century collection of scientific writings called the Codex Leicester. It was acquired by Bill Gates in 1994 for $30.8 million.