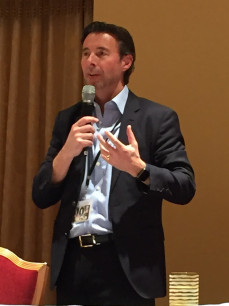 With all of the attention given to digital, especially inkjet, printing one might think that minimal consideration or R&D development is still being devoted to the sheetfed offset printing process. But, anyone who recently attended the 10th annual Print UV 2017 conference at the Encore by Wynn resort in Las Vegas, would easily argue otherwise. Advancements continue in UV and H-UV offset technology — and excitement abounds surrounding the benefits of today’s burgeoning adoption of LED-UV curing technology.

“Print UV is a networking event disguised as a conference,” says Steve Metcalf, president of AMS Spectral UV, whose firm, Air Motion Systems (AMS), was recently acquired by the Barry-Wehmiller Cos. and merged with its former competitor to become a Baldwin Technology company. As part of the acquisition, the Print UV conference has also become an independent entitity and is no longer part of AMS, according to Metcalf.

Bob Chapman, chairman of the $2.5 billion, 11,000 employee Barry-Wehmiller Cos., delivered the opening keynote address about business leadership and the need for caring about your workforce happiness, based on his best-selling book, “Everybody Matters.”

Most recently, AMS has commercialized a blended wavelength series LED-UV module called MultiWave, which incorporates a uniform blend of wide spectrum UV and LED wavelengths at equivalent power levels. This enables the curing of a much broader range of UV and LED inks, varnishes and coatings, without the reliance on mercury-based arc lamps or proprietary, dual-purpose power supplies.

Hans Ulland and Metcalf developed the Print UV conference, which was first held in 2008 with only 90 attendees. Since then, the annual event has created a community that encourages year-round, peer-to-peer networking among the printer attendees. “We wanted the conference to be more about the process. It’s not just about our company. It’s not just about one manufacturer or one press maker,” says Metcalf, stressing the conference’s mission to bring the entire value chain ecosystem together to enable information sharing about industry best practices and techniques, and new UV and LED-UV technological developments.

Designed to be vendor-agnostic and more intimate, the sold-out Print UV 2017 was also capped at 23 sponsor companies (an industry vendor has to be a sponsor in order to even attend the event), Consequently, the more than 200 people who attended comprised 60% to 70% commercial and packaging printers — including a large contingent of production executives, pressroom managers and senior press operators. 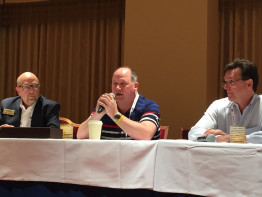 The conference has focused its program content efforts to encourage printers to share their experiences with their peers, as presenters and by participating in user panels. Metcalf recalls encountering reluctance of some printers to share their knowledge, especially in the early days of the conference. But that subsided, he says, once they realized that they typically get back far more valuable information and ideas in return for what they might disclose.

“The printers (more than 50% of them repeat attendees) see their peers do it the year before and then they’re encouraged to share their story the next year. You see that pattern repeat over and over again, and it’s just very gratifying to see how that’s made such a positive impact for so many printing businesses.”

This year’s event focused especially on LED-UV technology and some of its technological advantages — such as the reduction in the amount of energy consumption; the removal of heat from the process; no spray powder usage; fewer marking issues; reduced wear and tear on the press; ability to print on a wider range of substrates, including plastics; higher gloss capabilities; the lack of odor coming off of the printed product; and the ability to achieve high ink coverage and density, often with a single lamp, among several other benefits.

LED-UV technology also eliminates the process variables of offset printing, making it more competitive with short-run digital printers, while still providing litho’s inherent quality, cost and special effects benefits. “Some of our colleagues from press manufacturers and ink companies have even gone so far to say that LED-UV is the last major innovation that you’ll see in offset technology,” Metcalf reveals. “Either way, it’s really one of the few technologies I’ve seen that puts smiles on printers’ faces.”