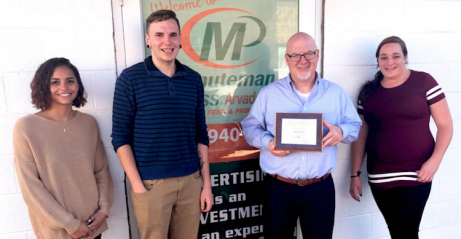 He adds, "As printing industry leaders for over 40 years, we have the experience to provide a full valuation of independent print businesses as well as provide guidance and expertise in selling their business. In addition, we have the unique ability to attract a wider pool of qualified buyers for sellers because we provide full training and ongoing local support to all of our franchisees. This means that buyers do not have to have printing industry experience since we will be there for them every step of the way."

Cameron explains, "After graduating college in the mid-1990s, I went to work for Office Depot as a business-to-business sales representative. I worked for Office Depot for about five years and spent another four years in the industry before I was asked manage a small family-owned commercial plumbing business. I helped grow that business over the course of three to four years, and then I went to work as a manufacturer's representative in the office furniture industry. I specifically sold furniture to the Federal Government under a government contract. My sales territory covered four states in which I traveled about 50% of the time. The contract was re-negotiated and my position was eliminated in late 2016."

Why Minuteman Press? Cameron answers, "Also in late 2016, the Franchise Business Show was in Denver, so knowing I would be going through a change I decided I would look into it. My attitude was wide open as I walked through the show. Seeing many restaurant and bar franchises, I quickly knew that the food industry was not something I was familiar with and not the direction I wanted to go. Minuteman Press caught my eye because the workday was similar to my work experience in both selling and managing a small business."

Cameron also liked Minuteman Press because of their focus on providing outstanding customer service in addition to their longevity in franchising as well as their strong brand identity. He explains, "I was tired of working for 'The Man.' Most of the companies I had worked for did not seem to want to take care of their customers and gave poor customer service that made me feel disheartened about going back to represent another company like that. Minuteman Press specifically noted that customer service and sending out a quality product was a key to being successful which was something I truly believe in. I spoke with many different 'business-to-business' concepts, but overall the strength of Minuteman Press internationally, with the overall number of stores reaching close to 1000 and being a franchisor for over 40 years was the main reason I chose Minuteman Press."

Jack Panzer, Minuteman Press International Regional VP for the Colorado region, adds, "I am thrilled to welcome Dwayne Cameron as a new Minuteman Press franchise owner. I am excited to help and support Dwayne as he begins this new and exciting chapter."