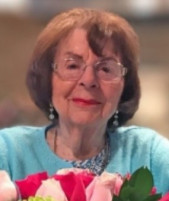 Betina M. (Greaves) Sommers passed peacefully in her sleep surrounded by family on January 6, 2023. Betina, who often went by “Bette”, was ninety-six years of age at the time of her death. Born on February 23, 1926, in Cambridge England, Bette was one of five sisters: Peggy, Helen, Ruby and Beryl.

Bette’s favorite pastimes were traveling, shopping, cooking, entertaining, and staying informed on current events and politics. She was a gifted artist, enjoyed swimming, puzzles, philanthropy, and above all else spending time with her family.

In 1949, Bette and her husband John founded Allied Printing Services, Inc. out of their garage. 74 years later, she leaves behind the legacy of a third-generation, family-owned and operated business with over 400 full-time employees. Over her career at Allied, Mrs. Sommers held many roles ranging from typesetter to proofreader to Executive Vice President of Administration. No matter her role, she was uncompromising when it came to quality and attention to detail.

Bette’s final resting place was beside her beloved husband, John, in East Cemetery in Manchester, CT.

Geeking Out Over Print

The Week that Was (1/23/23)
Comments
PRINTING United Expo