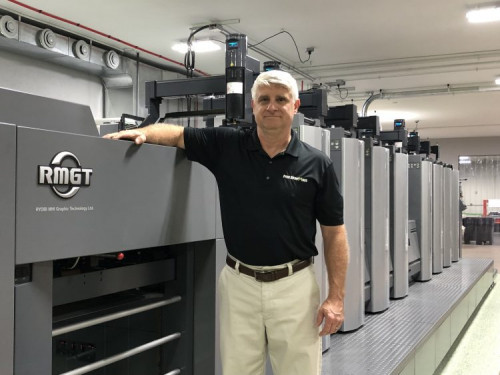 Print Direct For Less (PDFL) epitomizes the incredible success commercial printers can attain when they aren’t afraid of growing in new directions. Founded in 1984, the shop began as a small commercial printer with a two-color offset press that accepted any work that walked in the door. But in 2004, the shop was one of the first to embrace the e-commerce revolution. The rest, as they say, is history.

“We began selling online printing and using a gang run approach to jobs very early,” notes Ed Perron Jr., current owner and son of the original founder. “In the world of print, we are a pioneering company. In 2004, there were only a handful of businesses that were willing to take the risk in web-to-print.”

Over time, Print Direct For Less strategically upgraded capacity, adding presses that were both faster and that offered more features. In 2008, PDFL purchased a Ryobi 755XL 6-up offset press, which served them well for more than a decade. They were so pleased with its performance, they recently made the decision to upgrade to the RMGT 920PF-8+LED-UV Long Perfector press. This 8-up model brings not only faster speeds, observes Perron, but also sheets that are 25% larger, giving PDFL far more capacity as well.

Perron anticipates that sales will, at the very least, double within the next 12 months as his staff gets up to full speed with the RMGT 920. “And that growth is just from work we already know is coming in, so that might be a rather low projection,” states Perron. “We are one of the few printers in this area with this type of press, so customers are jumping on board because the LED-UV technology provides something they really need.”

“The new perfecting press prints both sides in a single pass,” he says. “We basically just jumped from 6 pages per press pass to 16 pages per cycle as far as total throughput. That, along with a higher press speed, translates to over 270% more work from the same labor hour. Turnaround times are shrinking from 2-6 days to sometimes same day, with a max of three days on most projects. LED-UV curing allows us to go directly from printing into finishing, increasing the max throughput, which is the key to future growth. In fact, we already have a market for this work — not only will we be able to go after work from new customers, we are also picking up a sizeable amount of work from our current customers that we couldn’t handle previously.”

The new press was installed in early September, with Perron anticipating a week of training for his staff to get up to full production speed in just two weeks. He notes that because the press it is replacing was also an RMGT product, his staff has an advantage since many of the functions of the press are similar so he doesn’t anticipate a large learning curve. “It’s just going to be learning the news bells and whistles,” he says.

The new press will allow Print Direct For Less to decrease the number of shifts it operates; currently the shop has two shifts, running 20 hours per day, but Perron believes the RMGT 920 will cut that to a single shift — for now. “With all the new work we anticipate for this press, I think we’ll be loaded back up pretty quickly,” Perron says. “I think we’ll be back to two shifts and maybe a third as our turnaround time and enhanced print quality brings in more and more work.”

Even more than the technology, Perron attributes the success of his shop to the hard work of his 20-plus employees, as well as a loyal customer base that keeps returning — some have been continuous customers since 2004. “We separate ourselves because we are much more customer friendly. Clients are able to get hold of us, and we take a personal interest in every job. A lot of them leave other online printers because thy can’t get any real service, but I feel that’s a critical factor in long-term relationships. It’s harder to get a new customer than to keep an old one, if you do all the right things.”

“Ed’s story is a true inspiration — a family operation that has grown into a powerhouse printer. And they have done it by being fearless when it comes to investment in new ideas and new equipment, but at the same time, they are smart and strategic about when and how they do it,” notes Chris Manley, president of Graphco, the RMGT Distributor in the Midwest and Southeastern US. “It’s inspiring, and I am proud that Graphco has been part of their journey since Ed’s family purchased their first Ryobi press from us in 2008. I am looking forward to working with PDFL as they grow in the next decade, with the new technology and opportunities the RMGT 920 will bring to their operation.”