In the continuing escalation in his attack on Amazon, President Donald Trump issued an executive order yesterday for the establishment of a federal task force, led by Treasury Secretary Steven Mnuchin or his designee, to investigate the finances of the U.S. Postal Service (USPS), which has lost more than $65 billion during the past 11 consecutive fiscal years. The special commission is expected to submit a report on its findings and recommendations within 120 days.

President Trump has frequently complained that the USPS continues to lose money, in part, due to a "money-losing" bulk rate delivery contract it has with Amazon to deliver packages. Amazon is primarily using the Postal Service and its letter carriers for the "Last Mile" delivery of packages to an estimated 150 million homes and businesses, including on Sundays.

"It shall be the policy of my administration that the United States postal system operate under a sustainable business model to provide necessary mail services to citizens and businesses, and to compete fairly in commercial markets," Trump wrote in the executive order. "The USPS is on an unsustainable financial path and must be restructured to prevent a taxpayer-funded bailout.” The executive order calls for an examination of USPS policies, pricing and workforce costs, and will recommend reforms.

According to one report in Reuters, Wall Street analysts estimate that Amazon pays the USPS roughly half what it would be required to pay UPS or FedEx to deliver a package. UPS and FedEx also maintain negotiated contracts with the Postal Service for "Last Mile" delivery services. And Amazon is in the process of building its own delivery network.

President Trump has been accused that his directives seeking postal reform are really targeting Amazon and its CEO. | Credit: Pixabay

Some pundits argue that President Trump's tweets against the online retail juggernaut are politically driven, given that Amazon CEO Jeff Bezos also owns the Washington Post, which has been highly critical of Trump and his policies. Trump's ongoing public statements and tweets against Amazon, and how the online retailer is destroying the traditional brick-and-mortar retail industry, have negatively impacted Amazon's stock price. 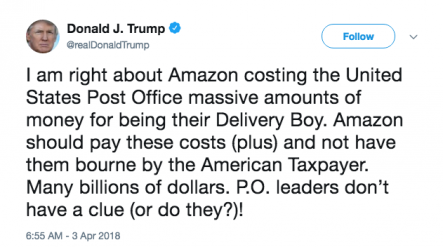 Trump has indicated that Amazon will have to pay a fair rate, which he says is more than what the USPS is currently receiving. How this will be achieved is unclear, however, given that the Postal Regulatory Commission (PRC) is largely in charge of determining postal rates for the USPS, an independent organization.

While the terms of the contract remain confidential, the Postal Service has indicated that the pact with Amazon is profitable and points out that it's legally prohibited from delivering packages at rates below its delivery costs. In fact, the USPS has indicated that the addition of package delivery services has been one of the few bright spots in its otherwise bleak financial performance, generating double-digit revenue increases.

The USPS actually set a record on Dec. 18, 2017, when more than 37 million packages were delivered - the most packages delivered in a single day in its more than 200-year history.

The main drag on USPS finances, in reality, has been the mandate that it pre-fund its retiree health care obligations to the tune of more than $38 billion. For the first time, last year the Postal Service missed payments it owes to the federal retirement system, for a combined total of $6.9 billion.

Last month, a bipartisan "Postal Service Reform Act of 2018" bill was co-sponsored by senators Tom Carper (D-Del.), Jerry Moran (R-Kan.), Heidi Heitkamp (D-N.D.) and Claire McCaskill (D-Mo.). If passed, the Senate legislation would make sweeping changes to current rules and regulations. Among them, the passage of the postal reform bill would eliminate the existing statutory pre-funding payment schedule, cancel any outstanding payments and amortize future payments over 40 years. (Click here for more detailed explanation of the bill, and the subsequent response it received from printers and mailers.)

The Senate bill would also create a new Postal Service Health Benefits Program (PSHBP) within the Federal Employee and Retiree Health Benefits Program (FEHBP), implemented and administered by the U.S. Office of Personnel Management (OPM), for all postal employees and annuity retiree recipients and require all Medicare-eligible postal annuitants and employees enrolled in the PSHBP to also enroll in Medicare, including parts A, B and D.

A similar bill that was presented earlier in the U.S. House of Representatives, called the Postal Reform Act of 2017, HR 756, has also received bipartisan congressional support.