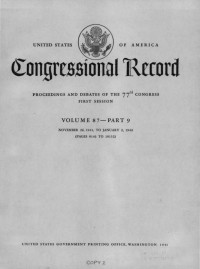 Even those who weren't alive on December 7, 1941, know that it was "a date which will live in infamy." That was how President Franklin D. Roosevelt famously described Japan's attack on the U.S. naval base at Pearl Harbor to a Joint Session of Congress the next day. It's one of the most famous of all American political speeches.

Thanks to a newly released digital version of the bound Congressional Record covering the years 1941-1950, that address and all of Congress' other debates and proceedings during that span, are now available for the public to view on smartphones, tablets, laptops and personal computers.

On Wednesday, the U.S. Government Publishing Office (GPO) announced that it partnered with the Library of Congress to release the digital version of the bound Congressional Record from 1941-1950 on GPO's govinfo. This release covers debates and proceedings of the 77th thru the 81st Congresses.

This era of Congress covers historical topics such as:

“This latest digital release of the l Congressional Record now gives the public easy access to the historic debates of Congress from the 1940s to today on smartphones, tablets, laptops and personal computers," declares GPO Director Davita Vance-Cooks. "GPO is honored to partner with the Library of Congress to continue to meet the needs of Congress and the American people."