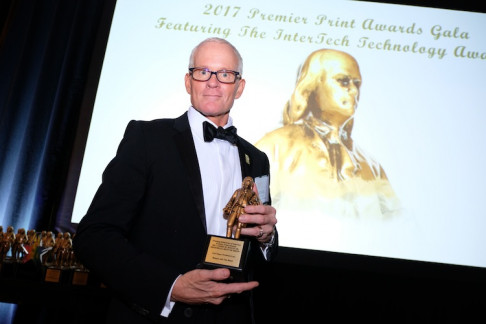 It’s not often that a printed piece is referred to as an “engineering wonder,” but that is how the James H. Mayes Memorial Best of Show winner was introduced during the Printing Industries of America 2017 Premier Print Awards Gala. The award was presented to Leo Paper Products for its entry titled, “Beauty and the Beast,” which had also earned a Best of Category award in the Diecuts and Pop-ups category for its intricate diecutting and structural design.

The awards ceremony, held at the Chicago Marriott Downtown Magnificent Mile, presented more than 100 Best of Category or “Benny” awards, presenting each winner with a trophy in the likeness of Benjamin Franklin, who PIA President and CEO Michael Makin referred to as “America’s best known printer.” Additionally, the gala honored the 14 Intertech Technology Awards recipients, who were recognized for innovation in technology that is expected to advance the production of the graphic communications industry. For a full list, visit printing.org.

The first, second, and third place runners up for Best of Show were also honored. The third runner up award went to Southwest Precision Printers for its entry, “Grupo Vidanta: A Legacy of Happiness Since 1974,” The second runner up award went to Antron Art Group for “Escapism Bill Bensley,” the Best of Category winner in the Product Catalogs (Four or More Colors, Printers with 101 or More Employees) Category. The first runner up award was presented to Body of Work for its “Million Dollar Desk Calendar,” the Best of Category winner for the Posters category.