Named after the man whose ingenuity and innovation gave birth to the modern folding carton industry, the Robert T. Gair Award is PPC’s highest honor and is reserved for individuals who have made significant and lasting contributions to the paperboard packaging industry. 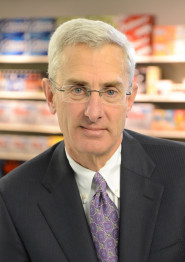 Scheible joined Graphic Packaging as chief operating officer in 1999. His knowledge, leadership, and business acumen were soon recognized and he was promoted to president and CEO in 2007. He was appointed to the board of directors of Graphic Packaging Holding upon its formation in 2007 and was then named chairman of the board in 2013. Under Scheible’s leadership, Graphic Packaging concentrated resources on the folding carton segment and divested assets that did not fit into the core business, all while increasing profits and making major debt reductions.

Throughout his career, Scheible has recognized PPC as a key resource and has encouraged his staff’s involvement in the association. Representatives from GPI have not only served on the board and on many committees, but also as board chair. GPI is also a dedicated participant in PPC’s programming: they have educated more than 60,000 children about sustainability through PPC’s TICCIT program, and also submit multiple entries into the annual Carton Competition. Scheible even gave a highly regarded keynote address at PPC’s 2014 Fall Meeting.

“In its 87 year history, PPC has only given 18 Gair Awards, so it is quite the achievement to be nominated,” explained Ben Markens, president of PPC. “Only the most committed and exemplary individuals can receive the award—those who have left an indelible mark not only on the industry but also on PPC, as well as their own communities. Without a doubt, David Scheible fits the bill.”

Scheible’s influence extends well beyond the paperboard packaging industry. He serves on the board of the Cancer Treatment Centers of America and is actively involved in the Atlanta area Chamber of Commerce, the Georgia Partnership for Excellence in Education, and the Learn4Life initiative.

“It is an honor to be chosen to receive PPC’s Robert T. Gair Award,” remarked Scheible. “The paperboard packaging industry is an exciting, challenging and rewarding space, and I’m glad to have made a positive impact on the business, as well as the people we serve.”

The Gair Award ceremony will be the centerpiece of PPC’s Spring Outlook and Strategies Conference in April 2016. There, CEOs and other industry leaders will honor Scheible’s outstanding achievement at a formal dinner and program.

About Paperboard Packaging Council
Now in its 87th year, PPC is the leading industry association serving suppliers and converters of all forms of paperboard packaging. PPC works to grow, promote, and protect the paperboard packaging industry while providing its members with resources and tools to compete effectively and successfully in the marketplace.

Why You Should Never Knock Off Another Designer