On Tuesday morning, as he rode his motorcycle through the streets of Lincoln, Neb., Dave Hadenfeldt, director of Print, Copy, Mail & Distribution Services at the University of Nebraska-Lincoln, was hit and killed by an SUV. The driver of the GMC Yukon told police he was changing a CD in the stereo and failed to negotiate a curve. Mr. Hadenfeldt was 57.

"This is a sad day at the University of Nebraska-Lincoln as we learn of the death of Dave Hadenfeldt," UNL spokesman Steve Smith told IPG. "For the past decade, Dave has been a respected, hard-working and well-liked leader of the university's office of print, copy, mail and distribution services. He will be deeply missed as a friend and as a colleague, and our hearts go out to his family for their sudden and tragic loss.”

A frequent attendee of the Association of College and University Printers conference, where he always proudly sported University of Nebraska shirts, Mr. Hadenfeldt had become a de facto spokesman for 3D printing in recent years, after his in-plant became one of the first to install a 3D printer. At the most recent ACUP conference in April, he led an energetic roundtable discussion on niche services being offered by in-plants, and provided a great description of his shop's entry into 3D printing. 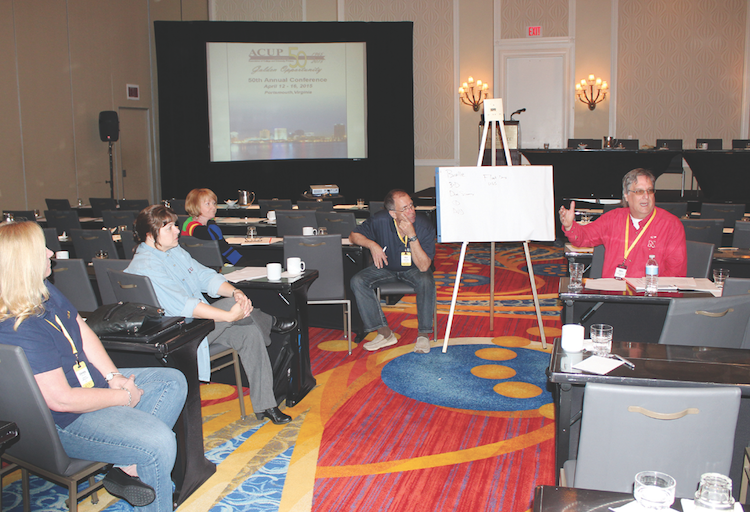 At ACUP 2015, Dave Hadenfeldt led a roundtable discussion on niche services being offered by in-plants.

He was honored with a University of Nebraska Board of Regents Kudos Award, which is given regularly to outstanding employees. At the ceremony, he was lauded for introducing several cost saving and innovative services and for bringing 3D printing to the university. He led a team to improve on an office copier contract after vendor changes were made, bringing UNL savings of well over $400,000 annually compared to the prior contract.

"He has taken UNL’s high quality print and mail operation to higher levels of customer service and efficiency," praised the UNL website.

On hearing the tragic news, fellow managers around the country expressed their sadness on an in-plant listserv.

"I have known Dave for many years and am truly saddened to hear of his passing," remarked John Sarantakos, of the University of Oklahoma. "He ran a  good program and was a leader in implementing new technologies."

"He had passion for his work and was happy to assist any and all," added Richard Beto, of The University of Texas at Austin. "I am and many others are deeply saddened to receive this heartbreaking news."

Mr Hadenfeldt and his wife Heidi had three children. His obituary notes that "he enjoyed teaching Sunday school at Trinity Lutheran Church for many years and reading books, but above all, he loved being with his family and taking walks together. His smile, laughter, stories, jokes and unique sense of humor will always be missed and remembered."