"2015 is an important year for Pitney Bowes as we continue to transform our company," said Marc Lautenbach, president and CEO, Pitney Bowes. "Despite currency headwinds affecting our first quarter results, we continued to unlock value in our company. In the first quarter, we reduced costs across the company and grew operating income, even as we increased our investments in marketing, infrastructure and the growth areas of our business.

"Our Enterprise Business Solutions group delivered constant currency revenue and profit growth, and our performance in North America Mailing was consistent with the previous quarters. Software licensing revenue increased by high, single digits and despite the strengthening dollar, our ecommerce business continued to deliver solid results. Looking beyond our first quarter, I remain confident in our ability to continue to meet our strategic objectives and, as a result, we are reaffirming our 2015 guidance."

First Quarter 2015 Results
Revenue totaled $891 million, a decline of 1 percent on a constant currency basis and 5 percent on a reported basis versus the prior year. For comparative purposes, revenue would have been flat compared to the prior year when the current and prior periods are adjusted for the impacts of currency and the reduction in revenue resulting from the exit of direct operations in some European countries that we completed in the third quarter of 2014.

Enterprise Business Solutions revenue grew 2 percent on a constant currency basis and was flat on a reported basis. Revenue on a constant currency basis benefited from continued growth in Presort Services, while revenue in Production Mail was flat. For comparative purposes, revenue would have grown 3 percent when adjusted for the impacts of currency and the divested revenues in Europe from the prior year.

Small and Medium Business (SMB) Solutions revenue declined 6 percent on a constant currency basis and 11 percent on a reported basis. For comparative purposes, revenue would have declined 5 percent when adjusted for the impacts of currency and the divested revenues in Europe from the prior year.

Adjusted earnings before interest and taxes (EBIT) was $178 million, which was an increase of $9 million, or 5 percent versus the prior year. Adjusted EBIT margin expanded 190 basis points to 20.0 percent.

Generally Accepted Accounting Principles (GAAP) earnings per diluted share were $0.40, which includes the adverse impact from currency of $0.01 per share. Earnings per share during the quarter were also impacted by a higher tax rate in part due to higher than usual charges related to the expiration of certain stock options and a greater percentage of revenue from U.S. operations.

The Company’s earnings per share results for the quarter are summarized in the table below:

Free Cash Flow Results
Free cash flow during the quarter was $85 million and $104 million on a GAAP basis. In comparison to the prior year, first quarter free cash flow was lower primarily due to the timing of accounts payable and higher capital expenditures related to the Company’s ERP implementation.

During the quarter, the Company used cash to pay $38 million in dividends to its common shareholders. The Company also retired $275 million in debt through use of $175 million in cash on the balance sheet and the issuance of $100 million in commercial paper.

Business Segment Reporting
The Company’s business segment reporting reflects the clients served in each market and the way it manages these segments for growth and profitability. The reporting segment groups are the SMB Solutions group; the Enterprise Business Solutions group; and the Digital Commerce Solutions segment. 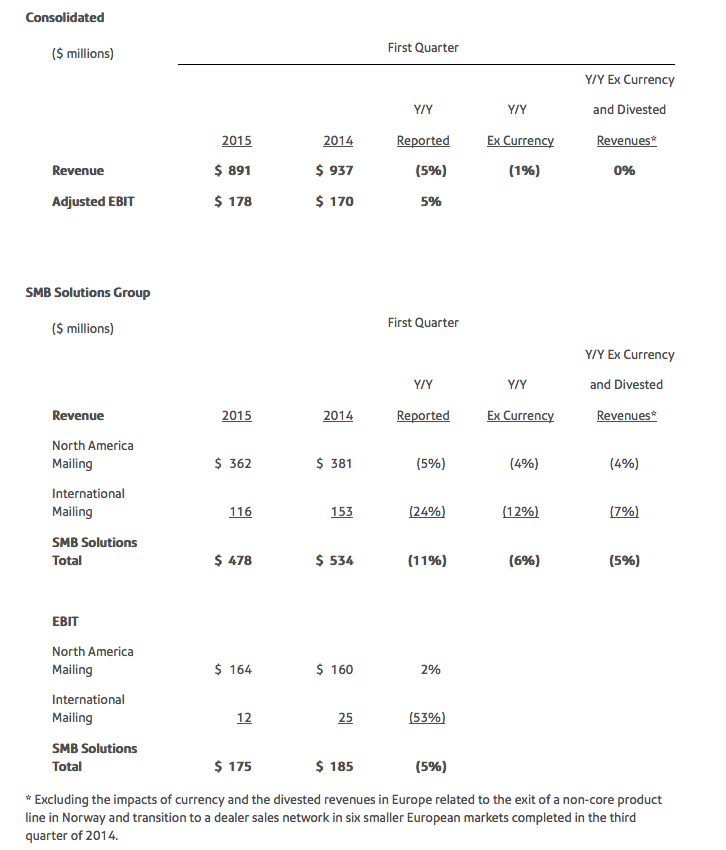 North America Mailing
Revenue for the quarter was consistent with the prior three quarters results. Recurring revenue stream trends were in-line with prior quarters driven primarily by financing revenue, which declined less than one percent, and the continued stabilization of rentals revenue. Equipment sales declined at a mid-single digit rate in the United States compared to a relatively strong first quarter in 2014. The Company continues to focus on driving productivity improvements in the segment’s sales channels. EBIT margin improved versus the prior year due to continued benefits from the go-to-market implementation and on-going cost reduction initiatives.

International Mailing
During the quarter, revenue declined 24 percent on a reported basis. Currency adversely affected the decline in revenue by 12 percentage points. For comparative purposes, revenue would have declined 7 percent when adjusted for the impacts of currency and the reduction in revenue resulting from the exit of direct operations in some European countries completed in the third quarter of 2014.

The Company continued to implement its go-to-market strategy throughout Europe during the quarter. This transition was first completed in the UK in January, which had positive revenue growth in the quarter, and is now complete in Germany. However in France, the Company’s second largest market in Europe, the Company is still in the consultation stages of the proposed transition, which impacted sales productivity during the quarter. EBIT margin declined versus the prior year primarily due to lower revenue and the impact of currency on some supply chain costs.

Production Mail
Equipment sales grew as a result of a larger number of inserting equipment installations during the quarter. Supplies revenue continued to benefit from the growth in production print installations in 2014. Support services revenue declined as a result of some in-house mailers shifting their mail processing to third party outsourcers who provide some self-service on equipment. For comparative purposes, revenue would have grown 1 percent when adjusted for the impacts of currency and the divested revenues in Europe from the prior year related to this segment. EBIT margin improved versus the prior year due to a favorable mix of higher margin equipment sales and on-going cost reduction initiatives.

Presort Services
Revenue benefited from the addition of new customers and an increase in the volume of mail processed. EBIT margin improved versus the prior year due to the revenue growth and on-going operational productivity.

Ecommerce’s revenue growth was driven in part by a continued increase in the number of packages shipped but did reflect the unfavorable impacts of a stronger U.S. dollar on the number of purchases outbound from the U.S. Ecommerce also achieved continued expansion in its UK outbound cross-border services.

Marketing services and shipping solutions revenue continued to grow as a result of new client additions for their respective product offerings.

Software license revenue increased at a high single-digit rate on a constant currency basis, but was offset by lower professional services and maintenance revenue when compared to prior year.

EBIT margin improved even as the Company continued to invest in development activities and infrastructure in ecommerce and software solutions.

2015 Guidance
This guidance discusses future results, which are inherently subject to unforeseen risks and developments. As such, discussions about the business outlook should be read in the context of an uncertain future, as well as the risk factors identified in the safe harbor language at the end of this release and as more fully outlined in the Company's 2014 Form 10-K Annual Report and other reports filed with the Securities and Exchange Commission.

The Company is reaffirming its annual revenue growth, earnings per share and free cash flow guidance. The Company’s guidance is based on an assumption that the global economy and foreign exchange markets in 2015 will not change significantly. This guidance excludes any unusual items that may occur or additional portfolio or restructuring actions, not specifically identified, as the Company implements plans to further streamline its operations and reduce costs.

Based on the above, the Company still expects in 2015:

About Pitney Bowes
Pitney Bowes (NYSE: PBI) is a global technology company offering innovative products and solutions that enable commerce in the areas of customer information management, location intelligence, customer engagement, shipping and mailing, and global ecommerce. More than 1.5 million clients in approximately 100 countries around the world rely on products, solutions and services from Pitney Bowes.