Philadelphia Campaigns for Amazon HQ2 with Bus Wraps ... in Seattle

By now, most people are probably aware that Seattle-based Amazon is looking for a home for its second headquarters, which it is referring to as HQ2. There have been 238 proposals from cities across the Americas, according to Amazon. Philadelphia is one of those cities and it took a very interesting approach to woo the behemoth ecommerce site.

It's no wonder why cities have been eager to get the attention of Amazon — Tucson, Ariz., sent Amazon a 21-ft. cactus and Birmingham, Ala., set up giant Amazon boxes and Dash buttons around its city — the $5 billion construction is expected to bring up to 50,000 jobs and "tens of billions of dollars in additional investment in the surrounding community," according to Amazon. Landing the deal could be transformative for the winning city.

Because of the massive potential an Amazon headquarters would bring its new home city, Philadelphia went all out with its Philadelphia Delivers (#PhillyDelivers) campaign, led by Philadelphia’s city commerce department and developed as part of a collaborative effort between various Philadelphia-area organizations.

The campaign includes a proposal video on a dedicated website featuring information outlining the reasons why Philadelphia should be the top choice, including a talent pipeline, logistics, livability, sites and letters of support.

Visit Philadelphia, one of the collaborators on the project, explained to Printing Impressions that the organization led a strategic social media push and initiated an ad campaign that utilized bus wraps, which Visit Philadelphia has deployed before in New York and Philadelphia. This time however, Visit Philadelphia bought advertisements on 48 buses running in two neighborhoods around Amazon's existing headquarters ... nearly 2,400 miles away in Seattle. 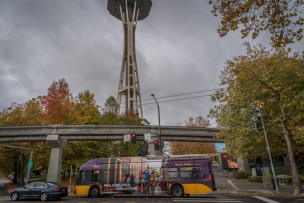 The series of advertisements highlights the merits of Philadelphia, and the utilization of bus wraps was very strategic because Seattle is the second-most bus-reliant city in the U.S. The ads played off of Philadelphia's well-known nickname "The City of Brotherly Love" with images and phrases, such as "The City of Independent Love" (in other news, I just found out that "Philadelphia" literally translates to "brotherly love" ... mind blown).

The Visit Philadelphia team explained that the bus wraps were a way to target specific neighborhoods, and with the organization's experience with bus wraps in the past, it knew they would be an effective, high impact form of advertising.

Producing bus wraps is no easy feat, however. There is a lot of planning that needs to be done before attempting a wrap, especially if the end product is intended to be used to attract new business. The Visit Philadelphia team explained the process in an email:

In general, there are a few challenges with bus wraps. First, the imagery and copy needs to be clear enough for the viewer to read in an instant as the bus drives by.

Second, the wraps often overlap window seams—which can skew the photography—so we tried to keep faces off of the window seams.

Third, since the campaign features full-bleed photography, the color of the copy needed to have just the right contrast with the background for easy legibility. The trolleys were even more challenging than the busses. Since the trolley ad size was so long and narrow, it was difficult to find photography that works well in those proportions. 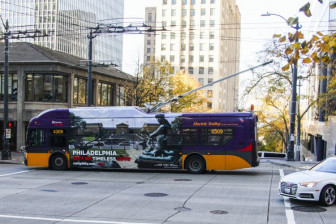 In addition to the printed components, Visit Philadelphia developed a comprehensive social media campaign across Facebook, LinkedIn and Instagram based on user-generated Philly lifestyle content. The team also distributed the video series "We Got You," which features Tarik Trotter of The Roots highlighting the best that Philadelphia has to offer.

Overall, the campaign, specifically the aspects spearheaded by Visit Philadelphia, illustrates the power of print and digital when combined strategically. The team commented:

Print has consistently been very important to us. Placements like billboards, transit posters, train station dominations and bus wraps are almost always guaranteed to have high impact and high visibility, and they are a nice cornerstone to anchor additional digital or social components of a campaign. We feature these types of print placements in our general campaigns every year, as well as special campaigns like Seattle.

Thank you to the Visit Philadelphia team who provided us with all of the information for the video and article: Cara Schneider, media relations director; Nathanael Saldana, creative director; Janie Tsang, senior advertising media manager; and Dana Schmidt, social media director.

For more information, check out the video that Printing Impressions did with our sister brand, Target Marketing, highlighting this fun campaign: