Anyone who knows Cheryl Kahanec knows that she was destined for the Printing Impressions/RIT Printing Industry Hall of Fame the day she opened the doors to her first digital printing business, PrintSense, 25 years ago. Today, her passion for the industry and willingness to share her knowledge have made her one of the most sought-after voices in the industry.

From wide-eyed entrepreneur to VP of Applied Printing Technologies (APT), to president of the Marketing Solutions Group for EarthColor, to CEO of Quantum Group (with many others along the way), Kahanec has been an avid student, evangelist and leader in digital-based technologies for her entire career.

But it’s not just her knowledge that has propelled her forward. It’s her. 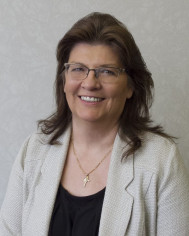 Diane Romano hired Kahanec back when Romano was the president of AGT. The industry was booming and AGT was “growing like crazy.” Romano, who retired recently as president and CEO of HudsonYards Studios, was looking for top-notch talent. The moment she interviewed Kahanec, Romano knew she had to be on the team. Kahanec was so perfect, in fact, that Romano wouldn’t take ‘no’ for an answer.

“She took the job and was supposed to start in two weeks,” recalls Romano. “A week later Cheryl calls and says, ‘You’re going to kill me.’ I said, ‘It’s possible. What?’ She responded, ‘I can’t take the job.’ I said, ‘Why not? I have your clients lined up.’ She said, ‘I’m moving to California.’ I said, ‘We have a plant in California. You’re still hired.’”

Kahanec was not just hired, but ultimately became VP of the company. “I knew from the start that she was special,” Romano adds. “Cheryl not only understood the industry, but she had this really special way of getting along with people.”

Has a Love for Technology and for People

In addition to her industry knowledge and passion, the characteristic so many people associate with Kahanec is her love of people. Amidst her fierce tenacity is the willingness to drop everything at a moment’s notice to make you feel that you are the only person in the world.

McMahon recalls the day, now almost 20 years ago, when as the VP of marketing for HP Indigo, he made the decision to shut down Indigo’s embattled user group, ICE (Indigo Customer Exchange). The blowback from the industry was swift and fierce. After taking body blows left and right, he received a call from Kahanec.

“First she asked, ‘You fired your customers? What were you thinking?’” McMahon recalls. “But then she stopped and said, ‘Okay, now that you’ve done it, how can I help?’” (An offer that ultimately led to the creation of Dscoop.)

“I was in the line of fire, and she didn’t need to get down into the trenches with me,” says McMahon. “But she did.”

On the Bleeding Edge of Digital Printing

Indeed, part of what has always driven Kahanec is pure love, both for the industry and the people in it. Her passion caught fire from the moment she saw her first digital press ... before there was even the software to drive it. When she was unsuccessful at trying to convince her employer at the time to embrace the technology, Kahanec did what you would expect her to do. She quit her job and opened the doors of her own company, PrintSense, in 1995.

Today, as CEO of Quantum, Kahanec not only runs one of printing’s top companies, but sits on a variety of boards, including Canon’s advisory board, and she is an active fundraiser for the Graphic Communications Scholarship Foundation (GCSF).

“Cheryl is one of the renowned people in this industry,” says Romano. “People go to her to get her insight and advice about technologies and customer issues. She has become one of the forefront leaders in digital printing - hands down.”

But it’s not just love for the industry that drives Kahanec. It’s her passion for her family. This includes her husband, Greg, and their three sons - Christopher, 30, a chiropractor; Jeremiah, 24, a programmer/software developer; and Gregory, 22, a college student and real-estate agent. “I tell my sons that brothers are forever,” she says. “When you fall, get up and brush yourself off. When your brother falls, hold him up until he can stand on his own.” 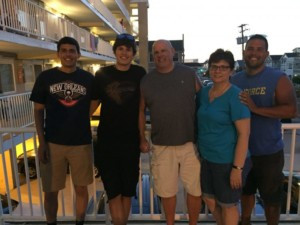 The Kahanec family includes, from the left, Jeremiah, Gregory, her husband Greg, Cheryl and Christopher.

It was this commitment to family that saved one of their annual cookouts on the Jersey Shore. Every year, 25 to 50 Kahanec family members descend on the area for a week of family time. Cheryl loves to cook, and she is always responsible for two family meals: pasta with all of the trimmings and BBQ. But tradition got tested one year when she walked out to the grills with a tray of chicken and got dive-bombed.

“I guess the seagulls decided they wanted the chicken more than I did,” she laughs. “It was something out of a Hitchcock movie.”

After fighting off the invaders, Kahanec got to the grill area to discover that none of the grills worked. Not one. “I had all of these people,” she recalls. “The wind was so bad that I don’t know if they couldn’t keep the grills going or what, but we had all this food - shrimp , steak and chicken - and no way to cook it.

“We took it into our hotels rooms, which all had kitchenettes, and cooked the food in pieces in whatever pans and pots were supplied - and it didn’t even matter. Everybody had so much fun.”

That’s Cheryl Kahanec - laughing at the seagulls, yet dogged in her determination to get the job done. That same determination drives her vision to help the companies she leads into the future.

Kahanec’s ability to focus on the big picture goes all the way back to her first entrepreneurial venture, even though she deemed it “an ultimate failure.” “It was the best education I ever had,” she says. “What I took from that experience is that just because the digital press would do something phenomenal didn’t mean that it made business sense.”

Kahanec has applied that same philosophy every day since. Every decision is held to three standards:

“The problem we have as an industry is we get hung up on ourselves,” Kahanec observes. “Too many people sit around and yearn for the ‘the good old days.’ For the past 25 years, printers have tried to save offset and not move to digital - all forms of digital. Because we haven’t paid attention, we have let other media come up and take over.”

That’s one reason she loves working with Quantum. It’s not just about production. It’s about creative, marketing, data and analytics. “We have invested millions of dollars in technology and will continue to do so,” Kahanec says.

“We are looking at new technologies, including nanographic imaging and omnichannel marketing automation. We are also looking at USPS advancements in how they are delivering mail and using cross-channel marketing within the mail system. We want to stay on the front lines.”

But most of all, Kahanec believes in investing in people. She is leading the search for new talent that possesses training and backgrounds outside of traditional print. “We’re investing in talent in creative services, marketing, data analytics, automation and technology,” she says. “We’re investing in software developers and data specialists.”

She’s a strong advocate for education and is also in the process of setting up internship programs at Quantum. “We have become a tired industry,” according to Kahanec. “We need to attract younger people. We need to stop thinking print is ink on paper. We need to get new ideas.”

In fact, Kahanec’s lasting legacy may not be what she has done for individual companies, but for moving the industry forward as a whole. “Whether it’s on a board at NYU or GCSF - or developing internships within her own companies - Cheryl has worked tirelessly at bringing younger people into printing to make sure it grows,” praises McMahon. “She has been a huge contributor to helping printers understand the role of marketing and helping marketers understand the role of print. Cheryl has been a pioneer in that.”

Even now, her passion for the industry does not wane. Kahanec is as in love with this industry as the day she began.

“We are fortunate to be in an industry that changes all the time. We can’t get bored! It’s an everyday challenge. Just being part of this industry is such a joy,” she says.

“One of the things I love most is the opportunity to be on advisory boards, to see the technology - not what [products are] coming out next year, but rather what we will see five or 10 years out,” Kahanec adds. “Not only can I see it and ask questions about the technology, but my opinion could also have some influence over its development. That is pretty awesome!”