In 2015, when the refugee crisis reached its peak, two Pakistanis began their vocational training at Koenig & Bauer in Radebeul near Dresden. After almost four years of training, the two, who fled for political and religious reasons, have now received their CIC certificates as skilled workers.

They learned the trade of mechatronics technician, which is considered to be one of the most demanding apprenticeships in Germany. With their vocational qualifications, Koenig & Bauer Sheetfed has taken both of them into permanent employment. Bilal Ahmad now works in printing tower assembly, while Saad Malik assembles electrical components on the feeders of Rapida sheetfed offset presses.

With these two Pakistanis, refugees have for the first time passed standard examinations in the Chamber district of Dresden CIC in this trade. The fact that this success story was possible is also due to the ten-strong teaching group of this class. Jochen Mann, head of vocational training, is delighted: "They all helped them and supported them with every trick in the book." They studied together, repeated the subject matter with the two Pakistanis and explained the processes to them. 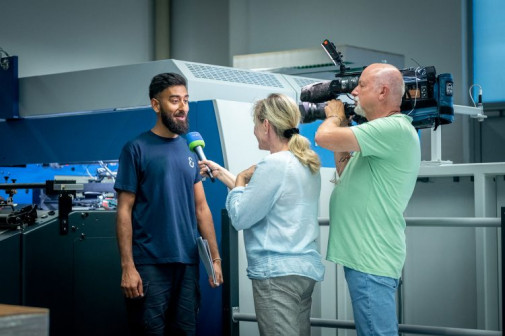 Bilal Ahmad now has his qualification in mechatronics. As a skilled worker he now installs electronic components in the printing towers of Rapida sheetfed offset presses.

Through the Senior Expert Service, a former master trainer supported Bilal Ahmad and Saad Malik in the last three months before the all-important exams, for the two of them had to be able to understand and answer the complex questions asked in German by the CIC. In the end they finished with better results than some trainees from Germany.

Sachsenmetall Award for Best of the Year

The vocational qualifications of the two refugees are just one of the highlights of Koenig & Bauer's vocational training program. Again and again, trainees of the printing press manufacturer win awards as the best of their year. This year, the employers' association Sachsenmetall awarded Tom Noack the title of "Best Young Skilled Worker in the Electrical Trades". He was also instrumental in supporting the two Pakistanis in their training. The industrial mechanic Theodor Hahn received the award "Best Young Skilled Worker in the Industrial Metal Trades". The awards they have received are part of a long chain of success within Koenig & Bauer's vocational training program. 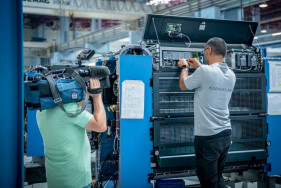 Mechatronics engineer Saad Malik explains what the vocational qualification means to him.

Koenig & Bauer is a multicultural, internationally active company that wants to inspire motivated young people to embark on a career in the future. Recently, young people from Syria, Eritrea, Colombia, Brazil and Thailand completed student internships at Koenig & Bauer in Radebeul.