Out of Home Ad Revenue Reaches Historic High in 2016 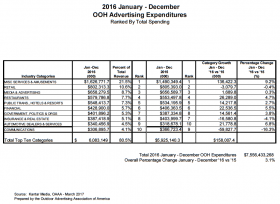 WASHINGTON — March 9, 2017 — Out of home (OOH) advertising revenue rose 3.1% in 2016 compared to the previous year, accounting for $7.6 billion, based on figures released by the Outdoor Advertising Association of America (OAAA). OOH spending was up 2.7% in the fourth quarter, compared to 2015. The revenue total marks a record high for OOH with 27 consecutive quarters of growth since the recession.

Of the top 100 OOH advertisers in 2016, 68 had increases in OOH spend equal or greater to the industry increase of 3.1%. Almost one-quarter were from the technology sector, and included Apple, Sprint, Comcast, Amazon, Facebook, Google, Lyft, Netflix, Cox Communications, Cylance, US Cellular, Uber, Boost Mobile, GrubHub.com, and Motorola. Facebook, which began spending in OOH in 2014, jumped to number 28 in 2016. 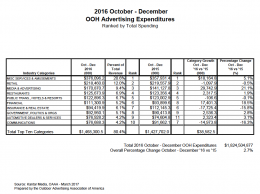 “The real, powerful advertising capacity of OOH continues to drive growth with its ability to connect with consumers through a diverse mix of formats,” said Stephen Freitas, OAAA chief marketing officer. “OOH offers advertisers a unique value proposition with bold creative delivered in contextually relevant environments. These factors, along with the expansion of digital platforms, will continue to drive OOH growth in the coming years.”

OAAA issues full industry pro forma revenue estimates that include, but are not limited to, Miller Kaplan Arase and Kantar Media (which is not adjusted to reflect changes in data sources), and member company affidavits. Revenue estimates include digital and static billboard, street furniture, transit, and alternative OOH (which includes digital place-based video and cinema advertising).