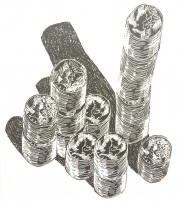 Here’s the next installment in our continuing series of republished “Otto’s Night Watch” columns written by Otto Boutin, which appeared monthly several decades ago in Printing Impressions. This week’s short story recounts the owner of a typesetting business during the Great Depression who helps a struggling, but ambitious, woman and her family at Busy Bee Print Shop. Mrs. Bublinski continued to grow the print shop, and the Linotype typesetter ponders how he could have become wealthy if he had merged his shop into Busy Bee. But, that would have required him to put up with Mrs. Bublinski's constant nagging. Life's a tradeoff.

She filled the doorway as she stood on the threshold. In her chubby hand she held a few sheets of paper.

“I’m Mrs. Bublinski,” she said. “I bought the equipment of the Busy Bee Print Shop. We’ve got it in our basement. I was told that you’d set type for us.”

“Gladly,” I said, getting up from the machine. I had been trying to beat the 1932 depression by going into business for myself. With a Model 8 Linotype and two extra magazines I operated a typesetting company in a small wooden garage in Chicago.

Mrs. Bublinski showed me the copy for a church bulletin. I had been setting for the Busy Bee until the very day the printer died. Now, he probably was smiling, four days in the grave, confident that the bulletin was to be printed on schedule.

“How much will you charge?” Mrs. Bublinski asked.

“Two cents a line, plus metal.”

“Two cents for every little line?” she asked incredulously.

Her blue eyes narrowed as she waited for me to cut the price by a half penny or so. I stared back at her until her eyes twinkled and we both laughed. She was almost old enough to be my mother, but she had an exuberant bounciness that made her quite attractive.

When Mrs. Bublinski picked up the type the next day she paid me in cash and gave me 20 pounds of metal. Then she said, “Please, Mr. Typesetter, will you show me what to do now?”

I didn’t have any work in the shop anyway, so I walked with her to the basement, where an old Gordon press stood on a wooden platform. A husky young man was squatting beside it, glumly massaging it with a gasoline soaked rag.

“This is Stashoo,” said Mrs. Bublinski. “My son-in-law. I bought the business for him. He’s been out of a job for almost a year. Just hanging around the house, doing nothing. So he may as well be a printer. And that’s my daughter over there. Mary, say hello to Mr. Typesetter.”

The pretty blonde, conscious of the smudge on her cheek, said hello. She was holding a composing stick in which she was setting a calling card for Stanley’s Print Shop. She was using 14-point Gallia for the main line and was having trouble with the p’s and q’s in the smaller type, Cheltenham, it seemed.

Mrs. Bublinski excused herself for a minute because she had to go upstairs to put the soup on.

Stanley shook his head as I unwrapped the type I had brought.

“The old lady’s crazy,” he told me. “She’s so damn nervous just because I’m out of a job. We’ve got no money and so we had to move in with her. She’s got plenty of room upstairs anyway, now that her old man has hit the road. He couldn’t stand her either. She just kept nagging him all the time because he lost a job. Hell, everybody’s out of a job nowadays. That’s no crime. But I ain’t no printer. All I ever did was hit cows on the head at the stockyards.”

Mary was wiping her hands in a towel. “Mother is only trying to help us, Stashoo. We’ve been living off her for almost a year.”

I looked into Mary’s innocent eyes, as blue as her mother’s. “How about you?” I asked. “Do you happen to know anything about printing?”

Mary shrugged. “I used to sell candy at Woolworth’s.”

Conversation stopped as the wooden stairs creaked under the weight of Mrs. Bublinski. She hovered over me, demanding that everybody pay strict attention while I locked up the form of the church bulletin. She was thrilled when, two hours later, we finally got the press running.

“How beautiful!” she exclaimed, holding up one of the sheets. Personally, I had never seen such a lousy job. I’m not good at makeready. From the basement I went directly to a movie to see Greta Garbo. I had enough of printing for one day.

Next morning, before I turned on the machine, Mrs. Bublinski was pounding at my door.

“I’ve got a rush job for you,” she said, huffing and puffing. “Bingo tickets. I’ll wait for the type. I promised them for tonight.”

She was getting on my nerves, but there wasn’t much of anything else to do and I needed the 50 cents. For 50 cents I could buy a loaf of bread, a quart of milk, four weenies, and a can of beans. So I made up the ticket and even put a fancy border around it.

A few hours later Mrs. Bublinski was back with the copy for the dance tickets for the church in the next parish. “And they want to put out a 16-page program,” she said. “You’ll show us how to put it together, won’t you?”

She fell into the habit of dropping in to see me three or four times a day, always asking questions, always bringing in some kind of order. She was a very church-going woman, going from one church to another, all over town, picking up orders. Along the way she didn’t neglect the butchers and bakers and undertakers.

One afternoon she plopped herself into a chair beside my machine. “I’ve just made a big deal,” she said. “I bought out another print shop. The man was going broke, so he gave me the whole outfit for three hundred dollars. He wanted four. Now we’ve got two presses and a lot more type. And a better paper cutter. My husband’s making a new floor in the basement.”

“Your husband? Is he back from Texas?”

“He wrote me for money, like he always does. And I told him to come and get it. That we’ve got plenty of work for him right at home. He’s tired of running around, anyway. He ruined his stomach. He needs my cooking.”

I had to buy a few more font matrices to keep up with all the work that Mrs. Bublinski brought in. Thanks to her, I was turning the corner towards the prosperity that President Hoover kept promising.

Then one day she said to me, “We’re moving into a bigger place. So we could put in a Kelly and print a high school paper. Would you want to move in with us?”

I wrapped the package slowly, gaining time to think. “No,” I said finally. “I’d lose all my other accounts.”

“But I’d get enough work to keep you busy,” she said.

I didn’t like the idea of having Mrs. Bublinski breathing down my neck all the time. Rush this job and hurry up with that one. But without her business I’d be back where I started, drowning among the deadbeats.

“Let’s let things the way they are for the time being,” I said.

“But we need a Linotype in our own shop,” she insisted. “We’d get faster service. And save a lot of running back and forth. If you merge with us, you’ll have a share of the business. If you don’t, we’ll have to buy our own Linotype.”

I didn’t want to merge with anybody. I wanted to feel free to go to the beach when the sun was hot and to the movie when the picture was good. I felt that I had been trapped too long in an old garage, and that being trapped in a corner of Mrs. Bublinski’s shop might be even worse.

“Why don’t you buy me out?” I told her. “I’ll give you a good price. And you’ll have all the equipment you need. Even a good saw.”

She frowned for a moment. Then she said, “I’ve been watching you run that machine. It’s not much different from a typewriter. I’m sure Mary would learn to run it. My daughter, you know, took typing in high school.

“And if we have trouble you’ll be around to help us, won’t you? Just for a day or two, until we learn to run it.”

I stayed with them about a week, showing Mary how to operate the keyboard and Stashoo how to change the magazines and clean the plunger. I couldn’t show the old man too much. He said he knew all about it because he once had a job running a punch press. Mrs. Bublinski paid me in full from the money she kept under the mattress and I said good-bye and took a train going west.

A few years later, when I happened to be back in Chicago, I dropped in to see them. They had added two Miehle Verticals and another Linotype. They even had a second-hand Ludlow. They offered me a job and so I worked for them for a few weeks. I realized I could have become a rich man if I had merged with them.

Then Mrs. Bublinski began to breathe down my neck again and I said that I had to go to Key West. I wanted to see the new highway that had just been built across the Keys. Or maybe I’d take a boat to Havana and write a book.