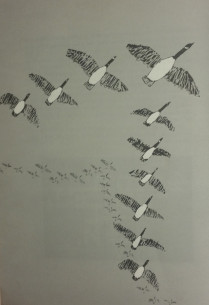 As Printing Impressions readies for its 60th anniversary in June of next year, I thought it would be appropriate to republish some of Otto Boutin's more memorable “Otto’s Night Watch,” columns, which were collected in a hard-bound book in 1973. Boutin was a literary master whose "Otto’s Night watch" columns captured the spirit of a bygone era, including stories based around “tramp printers” who traveled the country.

This column does contain a few references from Boutin that some people might find mildly offensive, especially in today's politically correct world. But they are reflective of societal views held by many people when he penned this column many years ago, and thus should be framed accordingly. If anything, the fact someone might object to his sentiments today, but not think twice about it back then, shows how far we have come as a society from the standpoint of individual expression and sexual orientation.

The wave of refinement which is sweeping the country leaves me gasping for air, like the gopher who finds the wide Missouri pouring down his front door.

Consider the modern pressman, for instance. He looks like a teacher and talks like a minister. Because his labor consists of pushing buttons, he seldom has reason to exercise any profanity.

He would look silly, swearing at a little green button.

One distinguished pressman, the president of a national organization, goes a step farther. He is not satisfied that pressmen have stopped using nasty words. He wants the entire world to stop using them. He wants his colleagues to stop the presses whenever they see a naughty word breaking out in print.

And he is violently opposed to sex. By pressing a button he intends to stop the confusion that Adam started by biting an apple.

What surprises me is that the reform movement comes from the ranks of pressmen. It just goes to show you how much they have changed.

The first pressman I knew was Big John. He was the boss of a 12-page Duplex, the kind that prints directly from heavy forms, four full pages to a deck. When Big John loaded the press with more than a thousand pounds of type, he took his position at the big upright lever and stood proud as a captain of a ship. He was the man who got the paper out every day and he knew it. Reporters could get drunk. Linotypers could go berserk, but Big John got the paper out.

One morning I sheepishly asked him, “Mr. Pressman, will you please stop the press?”

“What the hell for?” he demanded. He looked like a giant.

“Go away, boy.” He told me to do something very shocking.

He had been getting redder and redder in the cheeks until he exploded like a volcano. I was a block away and still running, but his profanity kept up with me, scorching my tender ears. I realized that with my Sunday school vocabulary I would never make a good printer.

So I tried my luck with a third-rate opera company that was visiting San Francisco. They gave me a job holding a spear on the stage. They smeared my face with tan grease paint and made me wear some kind of Egyptian underwear. At the proper moment I shouted, “Ho, Ho! Ho, Ho!” It was a good performance of “Aida,” but the critics made no mention of me. Maybe I should have hollered louder.

I was paid five dollars, which was pretty good money at one dollar per Ho, but I couldn’t live on five Ho’s a year, so I went back to face the monsters of the print shop.

I made up my mind to learn the language of the pressmen.

I was like poor Eliza Doolittle of “My Fair Lady,” learning a new kind of English. The role of Professor Higgins was taken by the pressmen. Day after day they pounded the words into my ears. I became accustomed to the sound.

Gradually I realized that the pressmen were not monsters at all. They were sensitive souls whose blustering speech was a social protest against the hard labor to which they had been condemned.

Since then my sympathies have been with them. I threw away my books and spent my spare time on a bench in the pressroom, listening to them talk. In their vile language they told me more about life than I could ever learn in a library. They used some words that cannot be found in even the most modern literature.

Therefore I doubt that books are responsible for all the evils of the age. I don’t think the ancient pressmen learned all the naughty words from books. And they seemed to know quite a lot about the birds and bees, even without a library card. One pressman did admit that he had read two pages of “Evangeline,” but I do not recall that she ever used any bad language. 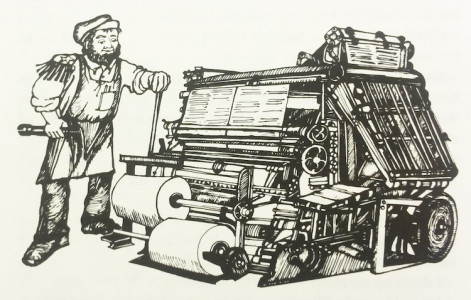 Back in those days nobody was so stupid as to spend 95 cents just to see dirty words in a book. The words used to be carved on wooden fences and outhouse walls, where we could see them for free.

Lately I’ve been buying books again, not because they throw in some dirty words as an inducement, but because the bench in the pressroom is not what it used to be. The language I learned in the pressroom is foreign to modern pressmen. Among those gentle gentlemen I feel like a dinosaur that was resurrected by mistake. So I stay home and read books.

A man’s world keeps shrinking and shrinking. There is no place he can go any more.

Burlesque is gone. At the last performance they had women in the audience and pretty boys in the chorus line. The only thing that remained the same was the taffy candy. It was the same candy they couldn’t sell for 20 years. They were still trying to sell it.

And the pool hall? Have you been to a pool hall lately? How do you tell the boys from the girls? The hair is the same and the pants are the same. Sometimes the shape of the sweatshirt gives you a clue.

And everybody giggles, boys and girls and the rest of them. How can you figure the angle of a three-cushion shot while some sexually confused eight ball is giggling over your shoulder?

Maybe this is all a part of that federal employment plan which prohibits discrimination between men and women. Congress has passed a law which says there is no longer any difference between Adam and Eve.

Nevertheless, when I run an advertisement for a model, whom I need while creating magnificent soap sculpture, I do not intend to settle for anything less than a bona fide female. I want a Venus, not a Vincent.

And the pressroom could be full of hazards nowadays despite all the safety devices with fancy buttons and flashing lights. If I sat on that bench and uttered a word in the language of ancient pressmen, I might get slapped in the face.

And somebody might scream, “Sir, I want you to know that you’re talking to a lady!"

Well, goodbye to the pressroom.

Better, I should go back to the opera. And sing in some foreign language where an occasional cuss word will pass unnoticed.

Anybody looking for a grizzly old Mefisto? Have pitchfork. Will travel.

Related story: Otto's Night Watch: Revisiting One of the Most Popular Columns in Magazine's 59-Year History