Otto's Night Watch: 'The Lady Was a Printer' ... Flashback Friday 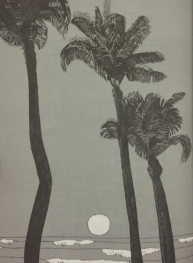 The Lady Was a Printer

It was midnight in Miami and The Lady was crying into her third martini. That’s the trouble with martinis. You never know whether they’ll bring fire or rain.

“I missed something in life.” The lady was saying, her eyes glistening in the intimate shadows of the cocktail lounge. She nodded towards a young couple romancing at the bar. “I missed moments like that. When I should have been having fun like other young people, I was running a Gordon in my father’s shop.”

“Don’t kid me,” she answered, getting eye shadow on her Kleenex. “It’s too late and I know it. I’ve thrown my life away for a shop full of equipment.”

“You’re one of the best printers in Chicago,” I reminded her.

She gripped the thin stem of the glass and drained the martini. “I came down to Florida to forget that I was a printer. I wanted to be what I never had to be ... a girl ... a woman.” She was sobbing again.

“We’d better be going,” I said, realizing that the tomato was getting overripe. “We’ll take a cab.”

“No,” she shook her head. “I want to walk barefoot in the surf in the moonlight. I never had time to do such things when I was a girl.”

So I tied my shoes together and slung them over my shoulder. Carefully I rolled up the $17 slacks I bought to impress The Lady. In her miniskirt she was running barelegged through the white foam of the sea. Like a dutiful beachcomber, I trotted after her, wishing I had worn my hobby jeans.

Finally she slumped down onto a bench. I sat beside her, breathing hard — in fatigue, not in passion.

She laughed as she dug her toe into the cool sand. “I’m sober,” she said. “Sober and happy. Martinis only make me cry. They make me want to be something I cannot be. But when I’m sober I like myself the way I am. A damn good printer.”

As far as I was concerned the romantic evening was shot to hell. The woman was sober, my slacks were a mess, and I didn’t know what to do about the sand on my feet.

“Maybe we need another drink,” I suggested.

“No. My father never let me drink” she said. “He had no use for drunken printers. Same with smoking. He was always preaching physical fitness. He was a heavyweight champ in the Navy before he became a printer. He had a pug nose, cauliflower ears and everything. Wanted to have a son, but got me instead. And never had another kid, just me.”

The Lady was looking into the distance as if she could see her father in a moon-silvered cloud above the sea.

“He was disappointed in me at first. He’d stay in his print shop late into the night, working and brooding. Once he got picked up for smashing his fist into the sides of parked cars. That’s how mad he was at the world. Then one day he asked me to give him a hand in the print shop. I enjoyed helping him. And he gave me a few dollars.

“I used to go to the shop straight from school, typing invoices and running presses. He showed me how to hold a composing stick. While other girls were picking out fancy dresses for the prom, I was wearing coveralls. While they were taking voice lessons and dramatics, I was listening to pop holler Navy language across the shop. I learned to holler back at him. That’s why my voice is so loud. I never had time to cultivate a bedroom whisper.”

“Sure, I married. I married a composer named Henry who worked for us. We had a bust season and so we spent a lot of time together in the print shop. Henry got along with the old man so I married him. Pop was real happy. He said that now he had two sons working for him. He signed a lot of notes for new machinery because he had great confidence in both of us. We decided to postpone the baby until we paid off the two Heidelbergs. Then my father got hit by a car and died.

“We missed him around the print shop,” she said quietly. “We missed his booming voice, his gruff, rugged honesty. They don’t make men like that any more. I couldn’t work for a week. The place seemed empty without him and yet I could feel he was there all the time.

“I wanted to sell the place, get out of it, forget it. I wanted to become just a normal woman and raise a family. But we kept hanging on for another year. The business was really too good to throw overboard and Henry needed my help.

“We hired a girl to take care of the office. That made it easier for me. I had more time to devote to the house. I was even learning to cook. And then all of a sudden my husband ran away with the girl. Left a note saying she was a real woman, a real pregnant woman, and I was nothing but a chunk of printing equipment.

“And so I had nothing left but the print shop. I stayed in the shop from morning till night. The work kept me occupied. It kept me from going wild in my loneliness. And I kept hiring and firing until I got the right kind of help. And I made a success of the print shop, didn’t I? Quite a success, didn’t I, really?”

Her voice quivered, as if she were going to cry again. Then with sudden determination she shook her head and got up off the park bench. She carried her chin defiantly high as were walked to the lobby of her hotel.

Five or six women were lounging around, empty eyes staring through us.

The Lady Printer studied them as we waited for the elevator. “All my life,” she said, “I wanted to be just an average woman, with a husband, a home and kids.”

“Maybe … maybe there is still time,” I assured her hesitantly, trying to keep the panic out of my voice. Suddenly I had become alarmed over the consequences of the Miami romance. I might be condemned to a lifetime of servitude at the Linotype, with a Lady Boss standing over me.

She laughed, as if reading my thoughts. Her voice was loud and clear again.

“No,” she said, “it’s too late for me to be just an average woman. I’m a tough old broad already. A damn good printer, but too independent to be pushed around by a husband. Or to be tied down by kids.”

“Maybe you’re missing something in life,” I said unconvincingly.

“Sure, I miss the printing business. My vacation’s over. I’m flying back tomorrow.”