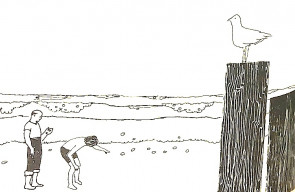 Here’s the next installment in our continuing series of republished “Otto’s Night Watch” columns written by Otto Boutin, which appeared monthly several decades ago in Printing Impressions. It recounts the tale of a father who sacrificed to build a printing business, just to have his only son not interested in taking over the family business so he could become a "starving" painter — despite the father's promises about all the money they could make together running a print shop. Sound familiar?

The birth of a son does things to a man. As he cradles the baby in his arms he is impressed with his own immortality. His image will be carried on from generation to generation till the end of time. He feels he has a deep obligation to all these descendants. He will weave them all into a powerful family.

If he were living in medieval times he would ride out with his lance to conquer new lands for his family. He would start a dynasty like the Tudors, the Bourbons, or the Hapsburgs.

But since he is living in a modern age he knows that the lance and armor are obsolete. If he is a printer, his weapon will be a printing press. His dynasty will be founded on business. It will have a man like Ford or Rockefeller, DuPont or Krupp, or maybe a Goldstein.

Simon Goldstein devoted the best years of his life to building a printing business.

At the supper table he would say, “Benjamin, you are my only son. Since you were a little boy you knew how to run the Gordon. Now it is time you helped me run the whole shebang. You should marry a nice Jewish girl and have many sons. And our business will keep growing. A family that works together gets rich together.”

“This summer, Benjamin, I will put you in charge. And I’m going to take a vacation. For the first time in 25 years.”

“Watch the money. And keep overtime down. Four years in college, oy, what an expense! You should know something already.”

And so Benjamin settled down behind the cluttered desk, his doodle pad on one side and his hot line to Sally on the other.

Because old man Goldstein didn’t trust airplanes, he took a train. He packed his suitcase with Printing Impressions magazines so he’d have something to look at during the long ride to Lake Louise in the Canadian Rockies. The trip took two days going and two days coming. Within five days he was back at the desk.

“Move over, son,” he said gruffly. "You’re ordering the wrong kind of paper.”

“Trees and mountains I should look at all the time? And a puddle of water? Better I should look after my printing presses. How come you don’t shave no more?”

“Sally likes me with a beard.”

“Sally? Nice Jewish girl, I hope. You gonna get married?”

“So you would settle down and have a family. And all the family would be working together. Maybe you will have sons, I hope. Too bad I didn’t have more of them. Six, at least. One in every department and two good salesmen. We would have had a big business.”

Benjamin pulled the strands of this stringy beard. “I ain’t cut out to be a printer, pop. I’m buggin’ out of the printing racket.”

“Pictures? Who wants pictures? You can print a million pictures on the Miehle.”

“A Picasso you want to be? With your appetite? I see the way you eat every day. You’re not the starving type.”

“I wouldn’t starve pop. Sally’s a substitute teacher and I’d do some teaching, too. Maybe two days a week. The rest of the time we’d paint. Sally paints, too.”

The old man pressed a hand against his high forehead. “Oyoyoy!” he said. “What’s to become of the business?”

“You built it for yourself, pop. It was your thing. Everybody has to do his thing. Otherwise he’s not really alive. And my thing is to paint.”

“Thing, schming!” The old man slammed a fist against the desk. “It’s that woman, the one who’s always on the phone. She turned your head...and ruined my family.”

“Cool it, pop. She’s picking me up any minute. You’ll get a chance to meet her. She’s quite a chick.”

Through the window they saw a small white car pull up at the curb. Beetle-shaped, it had big daisies painted all over it.

Sally cordially extended her hand to the old printer. Her long blonde hair cascaded loosely over her red poncho. She wore green tinted glasses that were ridiculously enormous. And when she sat down, the old man stared into his dictionary, too shocked to permit his eyes to wander up her endless yellow stockings. 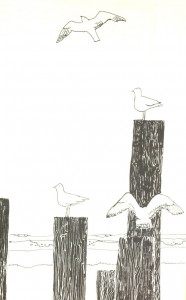 He sat there, not knowing what to say. And she kissed him on his bald head. Blushing, he muttered, “Thank you.”

His shoulders sagged as he watched them pull away in the small car.

“For this I built a business?” he mumbled to himself. “A Cadillac he could have and he rides in a kiddie car. With a shiksa yet.”

The old man clasped his hands together and looked heavenward. “Tell me, Father Abraham, where have I gone wrong?”

It was an unhappy time for Mother Rebecca as she had to listen to the arguments between her husband and Benjamin. They argued all the time, from morning blintzes to the evening latkes. Finally Benjamin moved out, probably to live in sin with the long-legged seductress. He said he was going to New York, where some kind of action was.

The old man got so mad that he sold the business.

“Why should I keep slaving for nobody?” he asked his wife. “Better we should go down to Miami and enjoy life, no?”

“Maybe I’ll learn to fish from a bridge,” she said. “We can live cheap.”

“Why live cheap? We’ve got enough money to live good the rest of our lives. Who needs Benjamin?”

And so the name of Goldstein will probably be forgotten by historians, unless Benjamin becomes another Michelangelo. So far he hasn’t been commissioned to anything comparable to the Sistine Chapel, but he’s done some pretty good work on the ceiling of a pizza parlor in the Bronx.

Every so often he comes down to Miami Beach with his beard, his long-legged wife, and the twin daughters, both blonde. While grandmother proudly wheels the double-sized buggy down Collins Avenue, Benjamin walks along the seashore with his father, looking for shells.

“You know, pop,” he said. “After all these years we’ve finally become buddies. Now that you’re not trying to shove the printing business down my throat.”

The old man stooped to pick up a periwinkle. Then he said, “We could have been like the Rothschilds, maybe. But what’s the difference? Let me buy you a beer.”