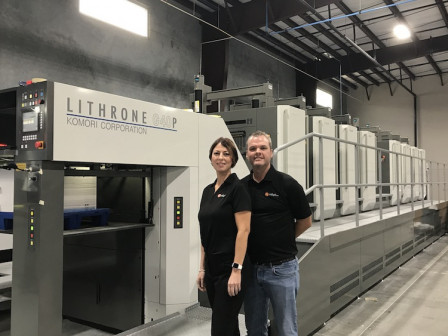 ROLLING MEADOWS, Ill. — May 1, 2017 — ND4C.COM, a customer-focused trade printer based in Houston, has just installed an eight-color, 40" Komori perfecting press (GL840P) equipped with Baldwin LED. Previously operating four shifts with two 29" presses, the advanced automation and fast job cycle time of the GL840P has made it possible to reduce that work to one shift. ND4C.COM expects to increase output by 200%.

According to Todd Frost, owner of ND4C.COM, “We only sell to resellers so it is extremely important that we reinvest and support them with the best equipment possible. Moving from 29" presses to the Komori eight-color, 40" press with perfector will allow us to offer more products at even faster turnaround times. The GL840P makes an incredible difference in production time and quality.”

ND4C.COM reports that the automated features of the press, such as the KHS-AI integrated control system and the full automatic plate-changing system (APC) has cut makeready time in half. The ability for printed items to cure instantly with the addition of the Baldwin LED also contributes to improved efficiency and job turnaround times.

“We are very happy that the GL840P has become a powerful contributor to ND4C’s reputation for offering the highest quality in wholesale products with fast delivery. This press is made for operations like ND4C.COM that need maximum speed while maintaining high print quality and high productivity,” said Mark Hopkins, VP of Sales, Komori America.