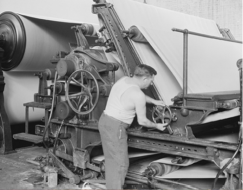 The PaperWorks Philadelphia Mill, one of America's oldest paper mills, will close and lay off 147 workers. (Photo from PaperWorks website.)

In operation for more than 200 years — making it one of America's oldest paper mills — the legendary PaperWorks Philadelphia Mill is slated to close, Philly.com reported. PaperWorks Industries, headquartered in Bala Cynwyd, Pa., plans to lay off 147 workers when it shuts down the venerable paperboard manufacturing operation, which is located on Flat Rock Road in Philadelphia's Manayunk section.

It was heralded in the 1860s as being the world's largest papermaking mill at that time.

PaperWorks Industries recently filed a Worker Adjustment and Retraining Notification (WARN notice) with the Pennsylvania Department of Labor and Industry, indicating that the Philadelphia Mill is slated to close on April 14th.

According to PaperWorks Industries' Website, the Philadelphia Mill also houses what it claims is the widest paper machine in the world.

It is a holding of Sun Capital Partners.