What Was Once Optional, Is Now Mandatory 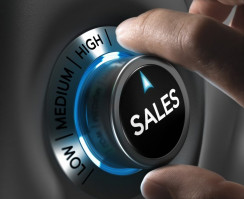 "New sales challenges: What was once optional is now mandatory,” was written on the whiteboard when the print sales reps filed into the conference room for the monthly meeting. As is company policy, no cell phones were allowed, leaving the reps to make small talk while they waited for the sales manager to arrive. A few minutes passed. Then, a few more. Nothing. This left the antsy sales force to fidget anxiously and lament the delayed start.

One salesperson sat alone. She was the newest rep on the team and its most curious. “What was once optional is now mandatory.” Reading those words made her frown as she pondered their meaning.

Looking over, the most seasoned rep in the group noticed her expression and then glanced over to see what was causing the look on her face. Guessing (correctly) she was searching for its meaning, he offered up a word and directed it in her direction.

“Creativity,” he said, breaking her trance. “That’s something we didn’t need to have back in the day, but do now. Business was such that it only took a strong relationship with a buyer to succeed in print sales,” he continued.

“Initially, it was our price that got us in the door. Then, it took years to earn the trust of the client before we were considered to be a valuable resource and asked for our help with design. Today? Companies are really struggling to survive. So, we all need to be far more creative to have a chance at earning an order.

“If you have a great idea for building their business, launching a product, or meeting some other perceived business challenge, by all means reach out and make that sales call. It’s going to take that kind of creativity.”

By the time he finished, the legacy rep had caught the ear of two other reps. They had turned their chairs and attention toward what was a private conversation. One of them asked, “Where are these ‘great ideas’ supposed to come from? We’re print sales reps. Unless we have a background in their particular industry, how could we possibly know the answers that lead to the creative approach you are suggesting?”

“That’s where research and curiosity come in. Those are two more traits we didn’t have or necessarily need years ago, but do now,” responded the seasoned rep. “Sure, we had the library to look up information on a company if it was big enough — both the library and the company, that is — but it was often incomplete and outdated. Today, you have more power in a smart phone than the astronauts had to make it to the moon.

“We can get access to their business needs and direction instantly. But, here’s the thing: even if we had the internet way back when, doing that kind of research was not required to gain an appointment, it was optional. What it did back then is the same thing it does today: earn us access further up the food chain, from buyer to, say, marketing manager or higher,” the veteran sales rep pointed out.

“Today, it’s a huge differentiator; one you can leverage to stand apart in every stage of the sales call. As for curiosity, that’s needed to take the information you gain from doing the research (or even something you stumble across in a newspaper), combine it with the capabilities this incredible technology affords, and come up with the solutions that best fit the situation. Come to think of it, selling solutions like I’ve described was also optional then, but mandatory now.

“Unless you have the lowest price — and we don’t — it’s the way you solve problems that will help you earn orders,” the older rep added. “So, let’s see, that’s four traits that fit the sentence on the white board. Any others?”

Sales Traits in the New Normal

It was a question he posed to the remaining reps in the room, all of whom were now listening in to this unplanned tutorial.

“What about attitude? Confidence? Optimism?” someone interjected. “These are scary times.”

The seasoned rep responded, “We could debate whether those things are more important now than before, but I can certainly agree they are essential and critical during this historic era. In any selling environment, good selling attitude means approaching every client conversation with positive thoughts between your ears: I am the best. I sell for the best. My customers are the best. These are not words you’d ever utter, but a fervent belief in them puts an intangible tone of success in your voice. It serves as a basis for the rest of your call, and permeates through every aspect of the process. It will be heard between the lines by the customer and it will make a difference.”

“The optimism piece has two parts, actually,” added another veteran sales rep. “There’s the external ‘anything is possible’ belief that is welcome in any sales call, but the internal ‘I can make it in sales’ is equally important, not only for you who are just starting out, but for the rest of us trying to rebuild what we once had before the shutdown. That definitely belongs on the once optional, now mandatory, list,” a statement greeted with nods from the others.

“And what about the various components of time management,” a voice from the back shouted, “like organization, preparation, and planning? I’m finding the challenge of separating my job from my personal life to require skills I did not even have or need years ago.

“With kids at home, this new normal is too much to bear. It’s now a must to be hyper-focused on future tasks and appointments, not to mention the need to be doing the right things during the day. Increasing sales productivity is not a new component of effective sales, but it is more necessary than ever.”

The young sales rep rubbed her wrist. It was sore from writing down the many thoughts the reps many years her senior were sharing. A thought hit her and she looked toward the most experienced rep before asking, “If there could be only one trait that’s absolutely mandatory right now in order for me to find success in print sales, what would it be?”

From the time they walked into the room to those final remarks, 30 minutes had passed and still no sales manager was present. Deciding as a group to get back to work, the reps filed out just as the manger came rushing in, saying something about car trouble. “Where’s everyone going?” he asked.

Came the reply, “Back to work. Great meeting, though. Probably our best ever!"

How to Shampoo a Rug on a Work Day