Omni-channel marketing is all about enhancing a customer’s experience when interacting with a particular brand. An effective omni-channel campaign is one that is consistent, coordinates communication across all channels and takes an active management approach in monitoring the effectiveness of the campaign. We talked with three industry experts to learn how print plays an effective role in omni-channel marketing campaigns.

“Better together,” is how Cheryl Kahanec, president of the Marketing Solutions Group at commercial printing firm EarthColor, would describe the effectiveness of combining print and digital in a campaign. “I tell my customers that a campaign should not just be multi-channel, it should be omni-channel. The distinction being that ‘omni’ is a continual conversation, and ‘multi’ means that I have reached out in several different ways.”

One example of an omni-channel campaign that EarthColor, which is headquartered in Parsippany, N.J., created was for a telecommunications client. EarthColor produces trigger programs for the company, and currently produces about 50 jobs a month. One trigger program, in particular, involves a postcard promotion for a cell phone. “The telecommunications company sells two-year contracts, and offers the phones at discounts, or sometimes gives them away for free. We produce a 6x9˝ postcard, which has multiple phones on the front and back of the card.”

According to Kahanec, every piece of information on that postcard — the images, the pricing, the legal disclaimers — is based on the individual recipient. This depends where the recipients are in their contract time-wise, their past purchasing, where they live (because that affects regulations), and what they can be sold, legally. Even the images, she says, have to be new every single day, because it has to be the correct image for the manufacturer that’s producing that particular phone.

“Everything on that card — with the exception of the logos and the indicia — is relevant to the person who is receiving it — from their past buying habits to where they live. All of that information is on there, and it’s also tied into the client’s email program,” she points out. “The provider then runs tests daily on campaigns that are email only, print only and for some who receive both to monitor response rates. It then looks to see what draws the most and gets the most attention from its clients — tracking consumer’s behaviors after they receive them. Every time the company has gone through this process and tested it, the combination of using print and digital together gets the best results.”

According to Kahanec, the client typically received a good response rate in the single digits from its traditional campaigns. In comparison, the personalized trigger program receives response rates in the mid-teens — more than double the traditional campaigns. This particular program was all about timing: from the moment a customer went into a store or to the website and signed in, the company tracked their experience. From the time of initial contact with the customer, it is less than 24 hours before the relevant personalized card is in the mail.

EarthColor produces variable data direct mail using a mix of traditional and digital presses. For the distribution of large national programs, the jobs are sorted and processed into batches that are produced in either New Jersey or EarthColor’s Texas facility. “We print and mail the batches in the location that gives the best in-home date. This is a true distribute-and-print model,” Kahanec relays.

Another example of a successful omni-channel campaign that EarthColor completed was a campaign a few years ago promoting a commercial that aired during the Super Bowl. The advertiser launched an email campaign a few days before the commercial and also promoted it via its website and through social media. The client sent emails with relevant information before, during and right after the Sunday night Super Bowl. Additionally the customer requested that a relevant personalized direct mail print component be received in-home on the Monday or Tuesday after the game.

Both examples above are proof that “if you have a conversation with the customer instead of just pushing information at them, they will engage with the brand,” Kahanec concludes.

One omni-channel campaign that Carolyn Goodman, president and creative director at San Rafael, Calif.-based direct marketing agency Goodman Marketing Partners, noted, was for Rainbow Grocery, a San Francisco-based, worker-owned cooperative. A large, warehouse-style grocery store, Rainbow Grocery serves people seeking locally-sourced organic food, offers one of the largest bulk food options in the U.S., boasts a cheese monger who sources one of the largest cheese selections in California and has one of the biggest selections of alternatives (vitamins, minerals, homeopathic remedies and probiotics). The company carries no meat. 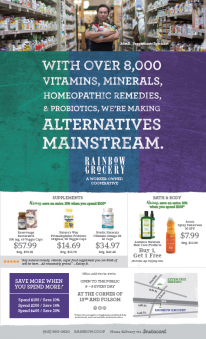 “In planning our marketing efforts for 2016, we first identified the geographic trade area they serve, and then determined the most appropriate media to reach that target,” Goodman explains. “The media mix included the use of direct mail, Pandora radio, the Google ad network and three print publications (one newspaper and two magazines).”

According to Goodman, print proved to be an extremely effective vehicle for several reasons. “Our selection of magazines reached true ‘foodies,’ those who cared about the quality and source of the ingredients they used, whereas the newspaper allowed us to feature weekly specials, and to highlight individual and unique products often carried exclusively by Rainbow.” Goodman adds that, as a result, the 2017 advertising plan includes additional print publications like free-standing inserts (FSIs) in the local daily newspaper.

“It is difficult to equate the ROI for the print efforts specifically, as we did not include trackable devices (such as a coupon) that could be tied back to the print ads themselves,” explains Goodman. “But we do know that the newspaper was the only medium in the mix that highlighted specific product SKUs, and we did see the sales of those items increase during the promotional period,” she adds.

“Since Rainbow partnered with Instacart in 2015 to offer digital shopping/home delivery services, we began highlighting that benefit in all media,” concludes Goodman. “In print, in particular, the Instacart logo had a fixed position at the bottom of every ad — prominently displayed to the reader. We watched Instacart sales rise nearly 9% over 2016, and we believe that print played a key role in boosting those numbers.”

Gary Hennerberg, the founder of the Hennerberg Group — a direct marketing consulting and creative services agency based out of the Dallas-Fort Worth, Texas, area — is not only a part of, but handles the marketing work for Vocal Majority, an internationally acclaimed chorus that has appeared throughout the U.S., Canada and the U.K.

Hennerberg handles the social media, writes content and produces videos for the choral group. Hennerberg says that he uses email and direct mail to promote upcoming concerts, including mailing out thousands of postcards every year.

“We send out direct mail pieces to our patron list every time we have an upcoming show,” says Hennerberg. “When a client buys a ticket, they may provide both an email address and a postal address, so we continue to grow our list with new concert goers. For each performance, we track daily sales. When I look at sales reports, I can tell when the postcard was mailed because of the bump in sales. We’ve learned, too, that people hold on to the postcard to remind them about the show date. In this case, from an omni-channel perspective, print and digital worked well together. And to me, it’s very powerful when you can sync all of the channels together.”

Giving readers the ability to opt-in to email lists on the group’s website is also very important, he explains. As the email list builds, it can be used to create custom audiences on Facebook, where Vocal Majority has a large follower base. Once email data is accumulated, the information can be used to create a sales funnel. “I’m a big believer in targeted advertising on Facebook. I use it so that ads are served to people on our email list, who are also on our direct mail list, along with retargeting to people who visited our website in the prior 180 days. This is how we bring people back to our website.”

Hennerberg notes that consumers are multidimensional today. He points out what he calls o2o (offline to online) channel leaping where a direct mail piece prompts the recipient to visit the website, make a phone call or watch a video.

“Social media and emails are glance-and-forget channels. But, for long-term comprehension, the best channel is direct mail,” Hennerberg contends. “Always has been. And I believe it always will be.”