Not all olive oil is created equal, and as those well-versed in extra virgin olive oil know, there’s no substitute for the real deal. 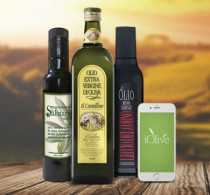 Thin Film Electronics has announced that four Italian olive oil brands will use its NFC technology to ensure the olive oil truly is extra virgin.

That’s part of the reason why four Italian olive oil brands are incorporating NFC technology into their packaging. Like many other high-end products, the olive oil industry has been hit by brands attempting to sell a lesser product as the high-end version — in this case, giving the “extra virgin” distinction to an unworthy olive oil.

According to a press release from Thin Film Electronics ASA, it has partnered with four Tuscany region-based brands (Buonamici, La Ranocchiaia, SPO and Il Cavallino) to incorporate its NFC SpeedTap tags. The press release states that the tags interact with iOlive, a mobile app, to confirm the authenticity of the extra virgin olive oil.

Packaging Perspective: In high-end liquor, cosmetics, accessories, clothing, pharmaceuticals — and yes, olive oil — products may not always be exactly what they claim. Anyone who has been unwillingly duped into purchasing an inauthentic product understands that sometimes it’s very difficult to distinguish the real from the fake.

But, according to Thinfilm, its SpeedTap tags are almost impossible to replicate. And via the comprehensiveness of the iOlive app, this combination of technology will give consumers the peace of mind that what they’re buying is authentic extra virgin olive oil. As Pietro Barachini, the founder of iOlive, says in the Thinfilm press release:

The iOlive app digitizes the IOC (International Olive Council) profile sheet for the assessment of olive oil, which is used in 44 countries to certify extra virgin products. Professional tasters use our platform to digitally capture their evaluations – including sensory analysis – and consumers are able to view that information through the iOlive app. The SpeedTap tags make accessing the data simple, instantaneous, and seamless.

The successful use of NFC in packaging typically evokes the two major pillars of packaging – communicating with the consumer and protecting the product. NFC has been proven it can do both, and through innovators like Barachini and Thinfilm, it will play a major role in curbing counterfeiters and maintaining consumer trust. When consumers are paying premium prices for what they believe to be premium products, the brands that leverage the latest technology to demonstrate their authenticity will be the ones who capture purchases from the most discerning of buyers.

The Global RFID Industry: An $11B Market in 2018
Comments
COVID-19 Resource Channel