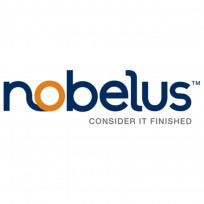 If you can save time anywhere in the order fulfillment process, why wouldn’t you? There are already so many headaches that come about in this industry, like paper shortages, postal issues, what have you. Why not shave off any time and make things easier on yourself?

That’s what Knoxville, TN-based Nobelus (Booth N1229) is focusing on in its booth at PRINTING United Expo, with a new piece of equipment that will appeal to any printer who specializes in laminated products.

“Our newest item is the Amiga 52 Double, which is a single-sided laminator that can laminate both front and back in a single pass,” said Angela Mohni, VP of marketing for Nobelus. “That’s really something that is very new to the industry. I don’t believe another one exists that can do that. Many of our single-sided customers are actually running single-sided, taking the sheet, flipping them over, and running them through again. This machine eliminates the need to do that, and you can run that single sheet through one time and laminate both the front and the back.”

When asked just how new this piece of machinery is, Mohni said that it’s just been a matter of months since it’s made its debut, and this is the first time she’s had a chance to see it in person, meaning attendees are getting an early look at something that might make a big difference in their whole order fulfillment process on items like postcards, brochures, sell sheets — really any kind of commercial print job, according to Mohni.

That double-sided laminator is complemented by another Amiga 52, which Nobelus is using to demonstrate single-side lamination jobs; as well as a photo embossing machine. Mohni says that with these in-person machines, the company can showcase what it can do with labels, flexible packaging, and more. So far, the interest around their booth has been consistent.

“The traffic has been really great,” she said. “We’re on day one, so I hope that continues,
because we’ve talked to a lot of really great customers and prospects. It’s nice to have everyone back together.”

Brendan Menapace is the senior digital editor for Promo Marketing. While writing and editing stories come naturally to him, writing his own bio does not.