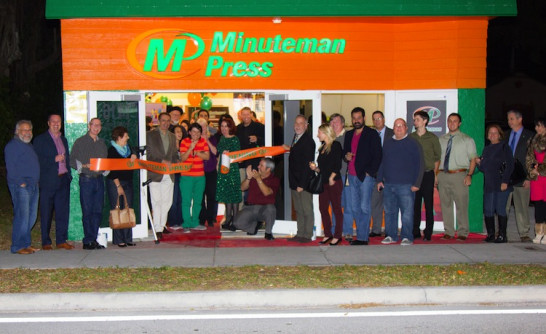 A ribbon cutting ceremony was held for the Fort Lauderdale location's grand opening.

FORT LAUDERDALE, Fla. — May 12, 2016 — When Maria and Aj Medina moved their Minuteman Press franchise to its brand new location at 1416 NE 4th Avenue located here, they knew they wanted to make a big splash. First, they boldly painted their new building in the highly visible Minuteman Press green and orange colors. Then, Maria and Aj enlisted the help of a local PR firm, Circles of Services, to promote their grand opening. The grassroots promotional efforts paid off as over 60 people attended the event and Maria and Aj secured several new clients on that day alone.

Now, wherever Maria and Aj go to grow their business, their "green and orange building" is the perfect conversation starter with potential new clients. Maria and Aj are planning to expand their footprint in Fort Lauderdale even further by showcasing Minuteman Press' graphic design services in the building next door to their current Minuteman Press franchise location. Look for that expansion in January 2017.

Taking Advantage of Business Relocation in Fort Lauderdale ... With a Little Help from Paint and PR!
In January 2016, Maria and Aj Medina were ready to officially move their Minuteman Press design, marketing and printing franchise to its new location at 1416 NE 4th Avenue. "We needed to stand out to make any impact on our grand opening," recalls Maria. "So once we had found our new location we had our building painted with Minuteman Press colors! This really made our building stand out, and local customers commuting to Fort Lauderdale really started to take notice. To this day, I will walk into a business to introduce myself and they will identify me by the 'green and orange building.'"

With the new building painted and the center ready to open for business, it was time for Maria and Aj Medina to turn their attention towards planning a successful grand opening. Maria shares, "After our move in January 2016, we hired a local PR firm through the Greater Fort Lauderdale Chamber of Commerce, Circles of Services. They helped us promote the event within the chamber and other networking groups in the community. Karina, the founder, also went with us door to door to invite local business owners to our event. It was door-to-door marketing taken to a whole new level. We visited local businesses with the intent of introducing ourselves and also inviting them to a free event; our Grand Opening!" 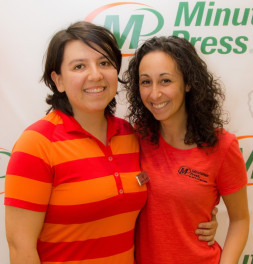 After wisely spending the time to introduce themselves to the business community and promote their grand opening, the next step for Maria and Aj was to make sure they capitalized on the opportunity to properly greet their new neighbors and guests at the grand opening. Maria says, "On the day of the event, we moved all our equipment to the back and loaded the front of our store with samples. Although some customers are interested in how things are made and how their products are produced, most customers like to see the finished product — so we made sure there was plenty to see! We kept our TV on, which showcased even more of our products. We gave away two raffle prizes and offered free food and drinks, which certainly helped increase the attendance to our event."

The grand opening was a rousing success that gathered over 60 local members of the community together right at the newly relocated Minuteman Press franchise in Fort Lauderdale. It also helped Maria and Aj generate new customers, as Maria explains, "We obtained nine new clients that night, mostly local businesses, which made the event definitely worthwhile."

Jeff Robey, Minuteman Press International's regional VP for Florida, also adds, "Maria and Aj have really taken the Minuteman Press franchise program to a whole new level. Their desire to work hard and apply lessons learned in training to successfully market their business is undeniable. The new building looks fantastic and I congratulate them on generating so much buzz for their terrific grand opening in Fort Lauderdale."

Expansion Plans in the Works to Highlight Design Services
With their big move completed and the successful grand opening now firmly in the rearview mirror, Maria and Aj Medina are enjoying building their business while also looking ahead to further carving out their presence in Fort Lauderdale. Maria states, "At the moment, we are planning on expanding our graphic design services in January 2017 into the building next door. We will definitely be looking at having another grand opening to showcase our design services!"

If the first grand opening is any indication, then Maria and Aj Medina are well on their way to fulfilling their current and future ambitions as Minuteman Press franchise owners.

Race and Printing: It’s Not All Black and White
Comments
COVID-19 Resource Channel