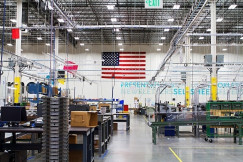 One of Mimeo's lean production facilities in Newark, N.J.

In many of the world’s industries, an 800-lb. Gorilla stands in the room. Sometimes that Gorilla, an overwhelmingly large corporate entity, can be decades or even centuries old. The progression of time and rotation of leadership has caused these giants to consist of complicated networks of parent companies, subsidiaries and startups.

These companies are slow to move, slow to react and slow to address their customers’ needs. Oftentimes in technology, their solutions are slow to implement. The printing industry is no exception to this trend of sleepy giants. In fact, it’s arguably the epitome.

A common misconception of the printing industry is that it is in decline, and that the need to print will decrease as technology continues to develop. The reality is quite the contrary. Through innovation and the shift to focus on services, the graphic arts industry has continued to grow. Print is larger than the online advertising industry, music industry and video game industry — combined.

Thus, you get sleepy giants that approach Fortune 500 enterprises of the same, providing them with slow-to-implement solutions that have not been refined or innovated, oftentimes in decades.

Frankly, this trend has left a bad taste among C-level executives and decision-makers who are ultimately trying to securely, efficiently and cost-effectively manage the way their organizations print and distribute their content.

The resulting landscape was one ideal for disruption.

Enterprises can be hurt by partnerships that aren’t technologically advanced. They can be hurt by partnerships that are slow to implement. Whether actionary or reactionary to the current state, implementations need to be lean and agile, seeing that all of the time spent transitioning burns through resources and human capital quickly — the opposite of the desired outcome when implementing a future state to replace the current one.

Fortunately, this has created a landscape bound for disruption. Web-to-print is a solution that empowers enterprises to seamlessly roll out a platform (requiring no software, just an internet connection) to thousands of employees scattered across the world. These employees can build, proof and ship their printed documents in under 5 minutes, to anywhere in the world. 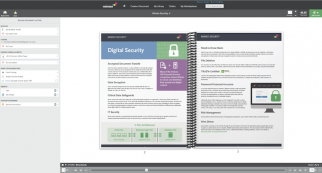 Mimeo took a step back from the beginning. Its founders invented patents that allowed it to be the first to market on printing on the internet. Through an anticipation of the need for Web-to-print technology in the coming decades, Mimeo strategically positioned itself to be on the forefront of this revolution. While the rest of the printing industry was already well established, much of their infrastructure and corporate structure did not support such an advancement. Thus became the difference between a printer struggling to implement technology, and a technology company that was able to print.

There are two types of players: tech companies that are able to print, and printers struggling with the integration of new technologies.

Migration of Offset to Digital
RR Donnelley announced the closing of a phonebook production facility last year, symbolic not just of changing technologies but also the changing needs of what is printed, and in what form. Offset printing is still a large and profitable business, but is increasingly finding less of a place in the way that enterprises share their content. The first step to printing smarter is printing less.

The trend of shifting what was once offset printing to digital print, or print-on-demand, is something that most forward-thinking enterprises aspire to do, but don’t know where or how to start. And the 800-lb. gorillas don’t have the best communication skills.

Print-on-demand benefits enterprises because it allows them to eliminate virtually all overhead and upfront costs, as well as minimize their risk. Print “horror stories” of mythic proportions are becoming things of the past. Legends like signed contracts indicating that it is at the fault of the client if 1 million offset brochures had an erroneous statement that no longer make the documents compliant with their industry regulations.

The nature of business itself is forever changing. On-demand printing enables the content to change along with it, without cost- prohibitive consequences. Organizations are able to print cost-effective documentation, even in small volumes. With globalization, documentation becomes localized. Localized materials are no longer in the quantity of 100,000s; there could instead be hundreds of versions of a brochure to meet city, state,or country regulations.

Globalization and localization are changing the way content is created. Print-on-demand was a complete disruption to the offset business. Paying large upfront costs was never attractive, but became even less so with the advent of digital printing.

Rethinking the Business Model
A newly found “print, when you need it” mentality greatly reduced soft and hard costs for organizations. Complex, slow-to-implement solutions that often pieced together the various siloed technologies and facilities of sleepy giants required high custom development costs during implementation. Once implemented, they encouraged and rewarded excessive spending, meaning that price breaks were given based on volume, and upfront costs punished lower volumes.

The amount of custom development and internal feedback required not just to implement a solution, but to also maintain it, can be astronomical. Adapting the solutions of a giant into an enterprise organization can be compared to that of piecing together parts from three different cars, in order to make a bus, using gum and paper clips. Though a dramatic comparison, the impact it has on budget and process is equally as dramatic.

Services Move to the Cloud
Cloud-based printing services put decision-makers in the optimal position to make the best selections when choosing how to produce materials. Simply put, Cloud-based printing services are the Netflix of paper by providing businesses with more printing options and efficient procurement processes. The direct result is that better decisions can be made, which pleases customers and employees.

As the sleepy giants of print continue to dominate the industry, one does contemplate their long-term existence. Will they go the way of Blockbuster? Forbes reported that Blockbuster — the failing brick and mortar video rental chain of the 1990s and early 2000s — never reinvented its company to compete in a Cloud-enabled economy.

For those not sacrificing the budgetary and time-consuming requirements to find out, all that matters is that innovation has arrived.

About the Author
Robert Byrne is the Content Marketing Manager at Mimeo, an innovator of cloud-based content distribution and print-on-demand.

Robert Byrne is the Content Marketing Manager at Mimeo, an innovator of cloud-based content distribution and print-on-demand.

Inspire Your Team to Be Their Best

Knowing When to Move on to New Career Challenges

Strategic Planning or Strategy and Planning

You Know What to Do. What’s Holding You Back?
Comments
PRINTING United Expo