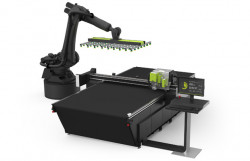 Miller Zell, a retail experience solutions agency, announced that it has introduced the Esko Kongsberg Robotic Manufacturing Cell to its printing technology arsenal. The highly productive machine is an automatic pallet to pallet finishing solution that will increase efficiency in the Atlanta-based facility by roughly 40 percent. Miller Zell is the only shop in the world operating this market leading technology, which works in tandem with their advanced digital finishing systems to create unique custom installations.

Job bottlenecks led Miller Zell to implement the Esko Robotic Cell to reduce hands-on time and increase capacity. The breakthrough automation operates two new cutters implemented last spring, allowing the team to save significant time during the production process and gain more flexibility and options for material substrates. Jobs that previously took over an hour and 15 minutes can now be accomplished in roughly 30 minutes.

“Our team is constantly looking for ways to better serve our clients and streamline internal processes,” said Paul Papantonis, president at Miller Zell. “The Esko Robotic Cell will be instrumental in improving on our already remarkable graphic center offerings and allow our team to explore new ways to serve our customers.”

Prior to the Esko Kongsberg’s three-week installation process, the team at Miller Zell had to reinforce the floor to accommodate the 4,400-pound robot.  Over the last few months, the solution has been central in creating navigational indoor signage for several national clients, including Walmart, CVS and Citizens Bank.

To check out the Esko Kongsberg Robotic Cell installation and the technology in action, watch the introductory video here.