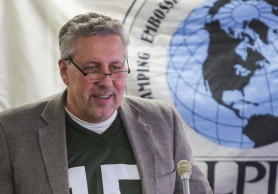 TOPEKA, Kan. — February 18, 2016 — The Foil & Specialty Effects Association (FSEA) is pleased to announce the recipient of the 2016 Lifetime Achievement Award: Mike Graf of Letterhead Press. The award, which will be presented during the 2016 FSEA National Conference in April, recognizes Graf for his leadership in the growth of foil stamping and embossing, as well as in the application of 3D-registered holograms. Graf helped transform foil embellishments from merely an emblem of quality into an element which added to a product’s shelf presence, impact and appeal. Graf’s influence also led to the use of foils and holograms to highlight a specific message in the graphics of a product launch or re-design.

In 1984, Mike Graf started with one Kluge in the back of an ice cream warehouse. Today, Letterhead Press is one of the largest, if not the largest, graphic finisher in the U.S., with a facility encompassing more than 130,000 sq. ft. and employing over 160 personnel. Graf was a pioneer in the production of large 3D-registered holograms, working with American Banknote in 1985 to produce the famous National Geographic “Skull” cover. It was considered the first commercially produced registered 3D hologram. This ensured Letterhead Press’s place as a leader in the holographic arena. The company went on to be involved with other groundbreaking applications for foils and holograms, including additional magazine covers, cereal boxes and security applications.

Letterhead Press has been at the forefront of marketing the benefits of high-visibility enhancements to brand owners, working directly with the end user to broaden usage and understanding for the concept. Through its marketing efforts, the company has created opportunities to add graphic enhancements to all types of consumer product packaging, including cereal, infant formula, house paints, frozen pizza and brownie mix. Mike Graf and Letterhead Press have been true leaders and innovators in the growth of the foil and holographic industry for the last 30 years.

Graf will be honored at the FSEA Gold Leaf Awards event on April 4, 2016, in Orlando, Fla., in conjunction with the 2016 FSEA National Conference. The 2106 FSEA National Conference will take place April 3-5, at the Rosen Shingle Creek Resort in Orlando, Fla. For complete programming and registration details, call (785) 271-5816 or visit www.fsea.com.