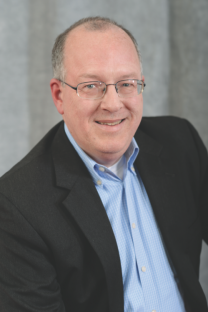 Michael Wurst’s induction into the 2018 Printing Impressions/RIT Printing Industry Hall of Fame should come as no surprise to anyone in the graphic arts. Not only is Wurst CEO of one of the industry’s leading printing firms - Henry Wurst Inc. is consistently ranked highly on the Printing Impressions 400 - but perhaps even more importantly, throughout his professional life he has devoted himself to the betterment of the industry. He knows the graphic arts business as well as he knows the back of his own hand.

A third-generation CEO of Henry Wurst Inc. (HWI), Michael Wurst’s entry into the printing industry began at an early age. In fact, he can’t remember a time when he wasn’t hanging about the Kansas City, Mo., shop. “I was born into the business; it’s all I have ever known. It’s the only place I ever drew a paycheck from,” Wurst confirms.

Henry Wurst, Michael Wurst’s grandfather, started the commercial printing firm just over 80 years ago. With his grandson at the helm, the company has survived the economic downturns and technology upheavals that led to the consolidation of the printing industry. From its traditional commercial print shop roots, HWI is now a leading print and related marketing solutions provider, ranked No. 59 on the 2017 Printing Impressions 400, with 321 employees and sales of $80 million for its most recent fiscal year, a 13% increase from the previous year.

Remaining on Cutting Edge of Technology

During Henry Wurst’s tenure, the company was one of the first in the country to install a web offset press; Michael Wurst has made sure that HWI stayed front and center with new advancements, integrating prepress and digital front end capabilities with a state-of-the-art pressroom that includes web, digital and sheetfed presses, along with extensive postpress and finishing equipment, and onsite USPS expertise to bolster its mailing and fulfillment services. 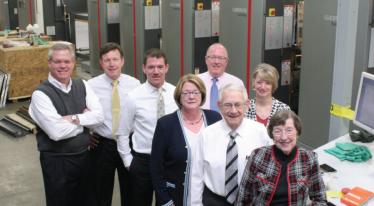 Shown above are family members who work at the company, including Mike Wurst’s parents, John (who passed away in 2016) and Peggy Wurst.

Aside from its corporate headquarters in Kansas City, HWI has an additional location in Denver, ensuring that it can provide the efficient mail/delivery system its customers expect.

As a young man, Wurst worked at various positions around the plant, which gave him the opportunity to learn all aspects of the family business. He attended Duke University, where he earned a business degree in management science and economics, followed by a year of graduate studies at Carnegie Mellon to study print production in-depth. “I took every one of the printing courses they offered,” he recalls, eager to learn everything he could about the business that was to become his life’s work.

While attending Carnegie Mellon, he interned at the Graphic Arts Technical Foundation (now a part of the Printing Industries of America).

“It provided me with a lot of preparation and education about parts of the business that I wasn’t exposed to at my family’s shop,” Wurst says. HWI was strictly a web offset shop during this period; at Carnegie Mellon and GATF he learned about other printing processes, such as gravure and flexo, as well as theoretical applications, such as the science of color.

Wurst moved back to Kansas City in May of 1980, following the year at Carnegie Mellon, and “I have been here ever since,” he notes. Starting out first in customer service, he became production manager in 1985, plant manager in 1989, and then finally CEO in 1995, a position he has held for almost 24 years.

M&A Is All About Timing - Good or Bad

And what a 24 years it has been. Asked to recall the ups and downs throughout the years, he notes, it’s been mainly “ups.”

Exceptions are the major economic downturns of 2001 and 2008, which “were very challenging, particularly the one in 2001,” he explains. “We had made quite a number of acquisitions. It was a prime time for M&A activity in our industry. Then the 2001 recession happened, and we had to unwind a fair amount of those acquisitions to get back to solid ground. We had designed a growth strategy, and then things outside of our control shot it all down.”

HWI was able to regain its footing, however - the experience “giving us resilience,” Wurst affirms.

“Certainly the acquisitions we have done have been very significant,” he adds. “They have been fun to figure out and implement, even as some have turned out great while others haven’t.”

While not all of the acquisitions worked out as planned, the strategy to diversify has proved successful. “Until the mid-1990s we were a web offset printing company,” explains Wurst. “Starting in 1996, we began to expand, adding sheetfed, digital printing and fulfillment - all areas we are heavily involved in today. That diversification has helped us survive the downturns.”

Economic downturns are just one of the challenges encountered by HWI. The emergence of digital technology, across the entire production process, has upended the graphic arts, in ways both good and bad, he notes. “Digital printing has helped drive shorter runs and variable data. That has a dramatic impact on how brands can market themselves. A lot of our customers are using this capability to great advantage.”

Digital prepress and platemaking have drastically reduced the square footage and labor needed, he adds. “Back in the day, we used to have 30 people in prepress; now we have six and are able to get more work done, and at a higher quality.”

HWI, while very much a 21st century firm, is also still very much a family affair, with seven family members including Michael Wurst working there. His wife Allison is a senior sales executive and son Brian is the controller. He has three children in all; a son, Chris, who is married with four kids of his own, and a daughter, Ashley. His sister Amy, his brother Tim and brother-in-law Andy Hendricks, are all part of the business. And his mother, Peggy Wurst, runs the Henry Wurst Family Foundation, which she took over when his grandfather died.

Added Dynamics With a Family Business

“I always say that business is tough, and being a family business is tougher,” acknowledges Wurst. “There are certainly added dynamics to having family involved yet, at the same time, if the business culture is such that family members don’t coast - but work as hard or harder than anyone else - there’s certainly an added level of commitment that can be a major positive. Customers also like dealing with family members, figuring that they have a conduit to the top of the organization if they need it.” 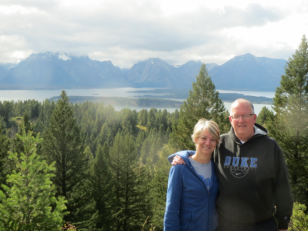 Mike Wurst and his wife Allison love to travel, including the trip they enjoyed to see the natural beauty of the Grand Teton National Park.

Wurst’s involvement in the Printing Industries of America (PIA) began early on his career. He participated in the PIA Association Relations Committee for many years and recently served as its chairman. He’s acted as PIA’s treasurer and chairman of the Investment Committee. In 2008, Wurst was inducted into the PIA Ben Franklin Honor Society.

In November 2014, Wurst was elected to the PIA board of directors as national treasurer. And, in 2016, he was named first vice chairman, making him next in line to serve as PIA chairman.

“I’ve been on the national board of PIA for a number years,” Wurst says. “I’ve always appreciated that involvement, meeting a lot of great peers from all over the country working together in support of the industry.”

He is also actively involved with his local PIA affiliate, Printing & Imaging Association of MidAmerica, serving on the executive committee for four years, including one year as chairman.

“During my 30 years of experience as an association executive with PIA, I was fortunate to know many of our industry leaders - several who are members of the Printing Industry Hall of Fame,” says Joe Polanco, a director at New Direction Partners and the former president of Printing & Imaging Association of MidAmerica. “Mike Wurst is one of the finest individuals I know - as a person, industry leader and friend. He is more than deserving of this recognition.”

Being inducted into the Printing Industry Hall of Fame “means a lot; the company is 80 years old; I am a third-generation member, and we have the fourth generation working here,” adds Wurst. “It is certainly a point of pride. It’s a great industry. I’ve loved being a part of it.”

When he’s not onsite at the printing plant, Wurst and his wife of 36 years love to travel the world. Their most recent trip was one of their more unique ones: two weeks in Newfoundland. “It was very rugged, and we were able to do some incredible bird watching and hiking. We saw some whales and an iceberg - the last iceberg before the summer melt started.”

Looking back at his tenure as CEO, as well as Henry Wurst Inc.’s 80 years in business, Michael Wurst points to the continuity of what the firm stands for.

“We work hard, and do what we say we’ll do,” he notes. “Our customers and our vendors can count on us to do the right thing. When we plan how to grow the company, we research the technology and the ROI thoroughly so that, when we make decisions, we are making smart ones.

“And for the most part we have done that, whether it’s adding digital printing, personalization, or becoming FSC certified,” he concludes. “Through it all, we’ve done everything with integrity - that’s the most important quality related to our success.”