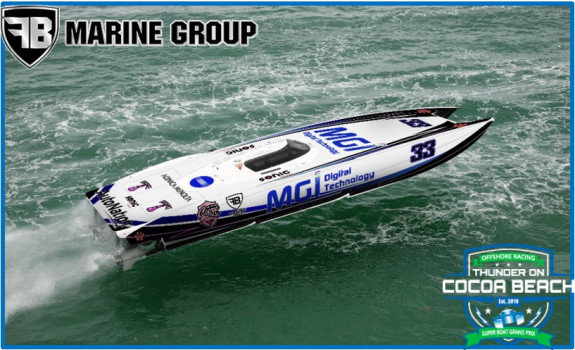 MELBOURNE, Fla. - May 18, 2018 - MGI and Konica Minolta have created an exciting new corporate sponsorship program to promote their industrial-strength digital print solutions. In 2018, the global print industry partners will participate in the 39th annual Super Boat International race season, which will once again be the premier high-speed, professional power boat racing league worldwide, with competitors cutting through ocean winds and waves at speeds up to 185 mph.

MGI and Konica Minolta are proud to be supporting the Super Boat FB Marine Group #33 vessel. The FB Marine racing team has one of the most successful track records in the professional sports world, with the staff achieving a truly impressive combined total of 12 National Championships and 10 World Championships victories in the last 25 years.

The first Super Boat Grand Prix race of the season, “Thunder on Cocoa Beach”, will be along the Florida Atlantic Coast from May 19-20th. The Konica Minolta & MGI FB Marine Group boat will also be featured at the famous “Miami Air & Sea Show” the following week May 26-27th during the Memorial Day Holiday Weekend. Several of upcoming race events will be nationally televised by the NBC Sports Network, including the 38th Annual World Championship Series in Key West from November 4th-11th.

Elite offshore, powerboat race teams from around the world compete from May through October in the U.S. National Series races to earn points and qualify for the famous Key West World Championships. The competitions span a variety of race categories, including the world’s biggest and fastest vee-bottom and Catamaran-style powerboats. The Super Boat International organization and championship league concept was founded by John Carbonell in 1989 and the global fan base has been growing ever since.

The dramatic offshore ocean excitement takes place along rectangular courses that average five miles in length. The festival race atmosphere of fun in the sun gets intensely serious when each contest begins, with unpredictable winds and waves challenging each teams’ human expertise and marine engineering skills for a thrill-based run for victory at sea.

The FB Marine Group is a family owned and operated business, founded in 1994 by Kim and Randy Sweers. The Sweers have followed their vision to build FB Marine Group into one of America’s leading luxury, center console and performance marine dealerships with several locations in Florida, offering complete one-stop sales, service, financing, parts, transport, and state of the art storage facilities.

The MGI & Konica Minolta #33 FB Marine Super Boat vessel is piloted by driver Glen Hibbard, assisted by owner and veteran throttleman Randy Swears and managed by team director, Richie Powers. All print industry customers, partners and colleagues are invited to follow these “Gladiators of the Sea” on their team’s journey to the World Championships tournament in Key West this autumn.

An Award-Winning Team of Championship-Level Products

The complete range of Konica Minolta’s portfolio of Accurio digital presses extends from the high-volume KM-1 inkjet press to the C71cf roll-fed label press and a comprehensive series of sheet-fed toner press solutions for every market segment in the industry.