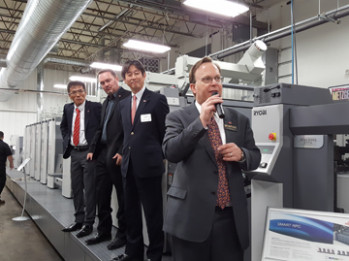 TOLEDO, Ohio — The whirlwind RMGT pre-drupa tour made Metzger’s Printing + Mailing one of the final, and most important, stops on its nine-country, 13-city jaunt when it came to town May 10 in advance of the international printing show extravaganza.

About 25 printers, journalists and other industry dignitaries converged on the $18 million commercial printer to get a glimpse of the 10-color RMGT 9 series (9210P five-over-five long perfector) sheetfed offset press with UV LED curing.

Chris Manley, president of Graphco — the Midwest distributor for RMGT — served as emcee for the afternoon. He introduced Yuzuru Ichimasa, president of RMGT, and Kozac Takata, manager of international sales and marketing, both of whom flew in from the company’s corporate offices in Japan to be on hand for the festivities.

RMGT is the result of a 2014 agreement between RYOBI and Mitsubishi Heavy Industries (MHI) to combine their sheetfed press manufacturing activities. As drupa 2016 will be the company’s first official appearance under the RMGT flag, Ichimasa said the main goal at drupa was to use the event as a platform to experience the synergies that exist between the manufacturers.

The RMGT booth will showcase three press models: RMGT 9, an eight-up offset press; the RMGT 10, a 1,050mm format offset press; and the new RMGT DP7, a B2-size, liquid toner-type digital offset press being jointly developed with Miyakoshi Printing Machinery. A B1 machine is being exhibited to appeal to customers who want to leverage it for a packaging application, which Ichimasa notes is widely viewed as a growth area.

In an exclusive interview with Printing Impressions, Ichimasa said that Metzger’s was selected as the host site for a number of reasons and felt it was appropriate given that the company is celebrating its 40th anniversary in business.

“The United States is an important market for us, and Metzger’s is one of the leading printing companies in the country,” he said. “Theirs is the longest machine for our 920 series, 10-color. We hope they are experiencing and enjoying the high quality of that machine, especially UV LED instant curing. I’m sure they can utilize this merit for their company’s growth.”

UV LED is one of the stars behind the one-pass, full-color perfecting. Ichimasa points out its benefits over conventional UV, including long lamp life, lower electricity costs, smaller footprint and no ozone or heat. He adds that the eco-friendly aspects fit in well with many 21st century pressrooms.

Manley also points out that the RMGT 9 series offers plate changing in three different levels of automation. “We think that is important because not every printer needs or can afford the full Smart RPC. It also may not give them enough benefit. [RMGT] does it very a-la carte based upon what the customer’s requirements are.”

The perfector, installed in October and on-line in November, has been kept fairly busy since being activated, according to Tom Metzger, chairman and CEO. The UV LED and single-pass printing did provide an initial learning curve, but the company has found it to be a versatile cornerstone of its pressroom floor.

“Our production manager plans for maybe seven hours to do a job and it only takes five. It’s a hungry press and we love it,” Metzger said. “The capacity and efficiency go hand in hand, but we improved both.

“We can do a whole day of job runs under 5,000, and we can do a job three days in row of 100,000 runs. We look at the press as a three-in-one or four-in-one package. We don’t mind running it as a two-over-two, four-over-four or a straight six. Because of the footprint and fast makeready speeds, we don’t look at it as just a 10-color press. With the economics of it, we can run that press like three different presses. The footprint is a big advantage, too.”

One of the printers on hand to inspect the RMGT 9 series was Gene Frost, plant manager for Next Day Four Color (ND4C), a Web-based commercial printer for the trade with facilities in San Antonio and Houston (the latter of which is managed by Frost). The firm is quite familiar with the RYOBI component of the collective, operating a trio of RYOBI 750 sheetfed presses.

At first blush, Frost was impressed by the fast makereadies and the automation provided by the machine. He said that while there was a potential fit for the 9 series at his plant, which handles heavy demand for flyers, booklets and brochures, it was too early to tell whether ND4C would pull the trigger.

“You always look to upgrade when it makes sense,” said Frost, who noted the company had been investigating the press for a year and a half. “Any time you buy a big piece of equipment, you’re taking a huge swing financially.” PI