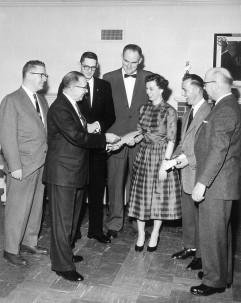 Photograph taken for a newspaper on March 21, 1958 when Woody Huffman (third from left) was presented a Certificate of Craftmanship. Image courtesy of McClung Cos.

WAYNESBORO, Va. — McClung Cos. announced the loss of Woody Huffman, a longtime employee, on Nov. 23, 2016. at the age of 93. Although Mr. Huffman retired in 2012 for a second time — he first retired from the company in 1988, but returned shortly afterwards as a part-time employee because he wanted to keep busy — he remains a legend.

According to McClung's website, Mr. Huffman holds the record for the longest employment at the company, an impressive 65 years. Starting as a pressman, he later became a production manager and eventually was named VP of operations. After the unfortunate passing of his brother-in-law — the founder of the company — Mr. Huffman became plant manager.

"Woody had a major impact on our company culture," noted Tom Trevillian, McClung Cos. chairman, in a release from the company. 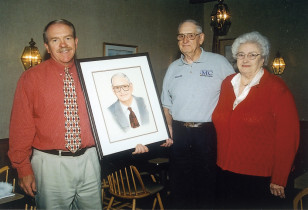 Tom Trevillian presents Woody and Maxine with his portrait when Woody retired for the first time in 1988.

Such an impact in fact that when the company expanded its facility in 2008, it named the new pressroom after him: the Woody Huffman Building. A portrait of Mr. Huffman — which was presented to him after his first retirement in 1988 — also hangs in the main hallway of the company's headquarters.

Trevillian explained in an email to Printing Impressions that he likens Woody's effect to that of a pebble being thrown into a pond, citing the ripple that it causes.

"He touched many lives, leaving a positive impact," Trevillian said.

Perhaps most incredible is fact that Mr. Huffman was loyal to the company for so long that he was able to witness a printing revolution. In 1947, when he joined the company, McClung was utilizing a letterpress that could print one color on an 8x10˝ or 12x18˝ sheet, according to the company's website. Now, McClung operates offset presses that can print five colors on 23x29˝ sheets, completely controlled by computers.

Which, by the way, is one form of technology that Trevillian said he had the pleasure of introducing to Mr. Huffman.

Tap Into the Resources of Your Advisory Board