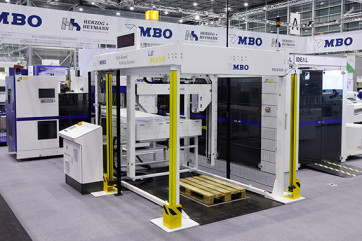 PHILADELPHIA — July 7, 2016 — MBO has announced success at the world's largest industry trade show for print, packaging and cross media solutions. In drupa's first few days alone, multiple orders for several of MBO's modular folding and delivery systems were signed. The modules are production line-independent, making it possible for operators to build lines for all types of jobs, on an as-needed basis.

Finish First: Advancements in Speed
MBO's Finish First show theme was indicative of the fast and powerful machinery on display throughout drupa. 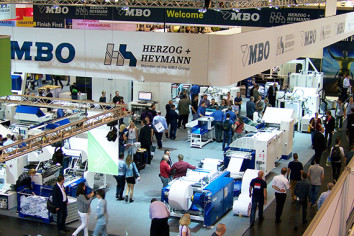 The busy MBO stand at drupa.

The K8-RS by MBO: Ultra-fast Folder is Core Component of the Latest, Fastest Production Lines
The K8-RS is the fastest folder in its class, and is the core postpress module for several of MBO's high-speed production lines. Built on the K8 platform, the K8-RS and K8-RS Digital were presented at drupa, as each is suited for different applications.

Additionally, the K8-RS Digital is for use in MBO web postpress systems, including variable book block production.  To utilize the K8-RS Digital inline with MBO web finishing equipment, the infeed system is not used, and a specialized register table is added.  Thus, MBO RS Technology is available to both cut-sheet and web systems.

About the MBO Group
Founded in 1965, MBO (Maschinenbau Oppenweiler Binder) offers a broad array of cutting edge, high-performance postpress solutions for conventional, digital, and hybrid print operations; and is the only supplier that covers all bindery areas including folding, mailing, and die cutting for both offset and digital environments. Five hundred employees are based throughout the world, at offices including headquarters in Oppenweiler, Germany; and Portugal, the United States., France and China. MBO acquired Herzog+Heymann in 1999.

MBO's history of pioneering new technology has served its customers, and their clients, for over 50 years. Life-long relationships are passed from generation on to generation. Year after year, the MBO Group delivers new products and technology that speed set-up and changeover through greater automation; reduced downtime and increased output and profits for customers.

The MBO Group's global headquarters, located in Oppenweiler, Germany, houses the research and development team responsible for the company's cutting-edge innovations. The extensive  dealer and support/service network, minus that which is managed by the independent offices, is also managed out of Oppenweiler.