AUGSBURG, Germany — February 15, 2016 — manroland web systems, based here, has recorded a significant increase in profit and market share in the financial year of 2015. With a profit margin of around 3%, the printing press manufacturer’s result increases to 6.2 million euros. The market share in new press business for web offset systems grew to 45% and the solutions in digital postpress from manroland web systems have established themselves further on the market. Profitability is expected to grow even further in 2016. 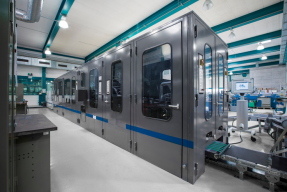 manroland web systems has managed to develop its market position in a still challenging economic environment. The incoming orders taken by the company group grew by more than 10% to around 260 million euros in comparison to 2014. The global market share for new web offset printing presses is around 45% (36% previous year). The fully completed restructuring measures from 2014, as well as the improved situation in use of capacities have also had a major impact. “In 2015, the manroland web systems company group generated a positive operating result of 6.2 million Euros before interest and taxes (EBIT). An order backlog in new press business of more than 150 million euros gives reason to expect good use of factory capacities and a further increase in profitability for manroland web systems in 2016,” reported Managing Director Jörn Gossé.

Not including external personnel and trainees, as of Dec. 31, 2015, the company had a total staff of 1,200 worldwide, 1,068 of which at the Augsburg site. manroland web systems will also be taking on all trainees and young skilled workers who are finishing training in 2016. The company is currently training 63 young people in total in various technical and commercial professions and will be offering 16 new traineeship placements starting in September 2016.

Major Successes
The wide range of newspaper printing presses from manroland web systems was showcased in 2015 with the successful start-up of the COLORMAN e:line at Druckhaus Bamberg as well as the order for a CROMOMAN 4-1 placed by Namasthe Telangana in India. The need for upgrades and retrofits is unrelenting in the newspaper segment in particular, but also in commercial printing presses, proven by a press relocation and a GEOMAN reconfiguration by Fairfax Media, New Zealand. In commercial printing, LITHOMAN systems have been equipped with the new In-lineCutoff Control dynamic (ICCd) at Baumann Druck, Kulmbach, Germany, for the same reason. Long-term service contracts, for example with COLORMAN e:line customer Nation Media, Kenya, confirm manroland web system’s claim to be the “best-in-class service partner.” manroland web systems has managed to secure new press orders for commercial offset printing in nearly all regions of the world. Growing demand in the U.S. and, in particular, the West European market is proving to be very innovative. Orders include major jobs such as four 96-page LITHOMAN presses.

Established FoldLine and FormerLine Postpress Solutions
manroland web systems has managed to develop its digital postpress business even further. The FoldLine and FormerLine In-line-Finishing units are taking the world by storm. One reason is manroland web system’s openness to various digital printing press manufacturers. Orders from South America, Africa, and Middle East attested to this in 2015. The workflow expertise of manroland web systems is frequently integrated into the production facilities with the WorkflowBridge and MasterQ software solutions. The production start of the FoldLine at Mengis Druck AG and Imprimerie de l’Avesnois were crucial for the newspaper industry in 2015. Swiss Mengis Druck AG consistently is first in the world to continuously print a daily newspaper digitally. Imprimerie de l’Avesnois produces various weekly newspapers in digital form in northern France to boost individualization and therefore the attractiveness of printed products.

Starting 2016 with Confidence
In web offset printing, the starting point for manroland web systems is a branch environment at a stagnating level. Within this framework, the German company wants to develop its market position in newspapers and commercial web offset further and remain an innovative driver in industrial digital printing. The sector’s leading trade fair, drupa 2016 in Düsseldorf (May 31-June 10, 2016), offers the ideal platform.