One Printer's Incredible Journey from El Salvador to U.S. Entrepreneurship 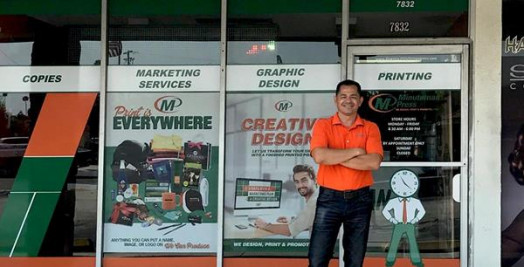 Manny Castro is a Minuteman Press franchise owner based in Downey, Calif.

DOWNEY, Calif. — July 19, 2017 — Ten years ago, Manny Castro realized his dream of owning his own business in the form of the Minuteman Press franchise here. On the surface, Manny’s journey to entrepreneurship is similar to many of his fellow franchisees. “I was a distribution zone manager for a weekly publication company, and I was looking for something new,” says Manny. He continues, “I had researched many other companies and different industries for a while, but none of them gave me the level of confidence that I needed to motivate me and move forward that Minuteman Press did.”

For Manny Castro, that confidence boost he received from Minuteman Press International — as well as knowing that he would have their support — meant the world to him. He explains, “Once my decision was made, and we moved forward with training and opening up my center, they gave me a great solid foundation, and second to none ongoing support to this day.”

From El Salvador to Entrepreneurship
Take a closer look at Manny Castro and you will get to know a man who has every reason to celebrate a milestone such as ten years in business. He says, “I came to this beautiful country 33 years ago without a dollar in my pocket, no skills, no academic degrees, no English, not even a high school diploma. Just a young teenager at that time, running away from a very conflicted civil war in El Salvador, looking for a better life.” Reflecting back on those painful struggles and thinking about where he is today, Manny exclaims, “All I can say now is God is great!”

Ongoing Support + Authenticity = How Manny Castro Builds His Business
For the past ten years, Manny Castro has built his business by building authentic relationships with his customers. As a business owner who is part of the Minuteman Press franchise system that provides crucial ongoing local support, Manny fully understands and appreciates the importance of establishing real connections with clients in his community. He says, “I love my local field representatives; we have a great relationship with Regional Vice President Dan Byers and Area Manager Steve Szymanski. They have my back any day and any time. Our success as owners is their success as well.”