When you think of an open house, the typical assumption might be a mundane walk-through of a facility with some coffee and donuts off to the side — oh, and don’t forget those tiny water bottles that you can finish in just one sip.

But an open house can be so much more than that.

For wide-format print service providers (PSPs) and print product sellers alike, open houses can serve as a tool to get people in the door to see what you’re capable of. It gives clients and customers a sneak peek at your potential, and it gives you an opportunity to really sell yourself and what you have to offer. And most importantly, it can add a human aspect that is sometimes lost in the technical side of the industry.

For Eagan, Minnesota-based Big Ink Display Graphics, husband-and-wife duo Tom and Janine Trutna say that before their open houses, they’d have long-time clients that still didn’t realize everything their shop could do.

“The big impetus of why we started doing the open houses was we’d have customers who we have had for years see something we presented during a presentation, and they’d blurt out, ‘oh, I didn’t know you could do that,’” Janine says. “And I was like, ‘oh my God, how could they not know? — we’ve been doing business together for four years.’ So, it was a way for us to put everything and anything we do in front of them in one spot.” 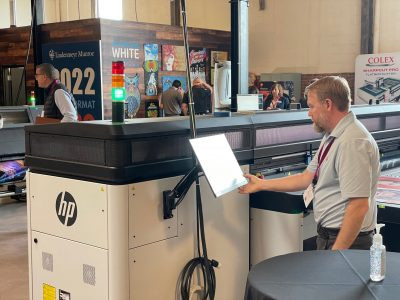 Getting People in the Door

For Milwaukee-based Olympus Group, President Brian Adam says one of the biggest challenges with an open house is not knowing exactly how many people are going to attend.

“The biggest challenge of hosting open houses is you have no idea whether you’re going to get five people or 100 people to show up because you ask people to RSVP, but with open houses there’s sort of that drop-in mentality, so there’s logistical challenges that come with trying to anticipate a certain number of people,” he says.

To ensure a turnout, Adam says Olympus utilizes grassroots marketing as well as social media. He says he’ll first tell his employees to tell their friends and families and from there they’ll utilize their LinkedIn to help spread the word.

Janine says Big Ink uses its current and prospective customer email list to help get people in the door as well while utilizing its social channels — specifically LinkedIn, Twitter, and Facebook.

“We send out an invitation to all of our customers and we send it out a couple of times — just the initial one and then a reminder kind of thing. And then typically, each salesperson would pick their top five or 10 and just follow up with them personally to see who is coming,” Janine says.

“For our event, we had our own sales team out there promoting it. We did a lot of internal marketing both to our salespeople and to our list of email addresses of users that are registered to our sites,” he says.

Tom does warn that not every event yields a turnout, but he urges to not let that discourage shops.
“Sometimes it’s a crapshoot ... We’ve had really successful ones [and] we’ve had other ones where we’re like, ‘wow, what happened here?’ and we just don’t get the turnout that we expect, but you can’t let that get you down or discouraged.”

While half the battle of an open house is getting people in the door, the often forgotten other half is getting them to actually stay once they’re there.

To ensure their open houses are more than just a walk-through, Tom says that they always incorporate some sort of activity that engages attendees. Not only does it serve an educational purpose, but it’s also fun for those who attend.

“We typically try to have a theme around it and weave a story through our facility; sometimes that’s interactive ... We give people a game card, and by stopping at different points in the building they collect points,” he says. “We’ve also created games, you know, spin a wheel ,or do a putt-putt course, or whatever, so we try to make it not just ‘here’s a pile of materials’ or ‘look at this printer.’”

Janine also touches on this, saying when they have hosted early morning open houses, they’ve set up breakfast with mimosas and with music playing to make it an overall good time for everyone in attendance.

Adam also agrees that just having machines running might not be the most exciting thing, so putting forth that extra effort to make it an event where people will have fun truly does make all the difference.
“I think if I just said, ‘hey come look at our printing capabilities,’ with my printers running, it would be pretty boring for most of our customers and multiple family members that our employees invited,” he says. “For an open house in Nashville, we brought in a local musician and, in Orlando, we brought in vehicles and wrapped them on-site.” 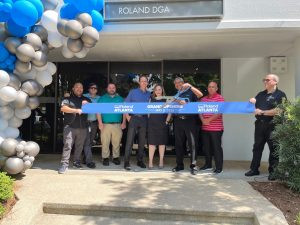 Dan Wilson, marketing director, Roland DGA echoes the sentiment of making an event interactive, as was the case when the company hosted an open house at its new Atlanta Imagination Center in conjunction with ISA back in May. The celebration featured a welcome address from Roland DGA VP of Sales Amado Lara, an official ribbon-cutting ceremony, and guided tours of the facility, plus a DJ, food, and drinks.

“Make it educational; make it hands on; let people bring their own files; let people explore different materials and different workflows; and let them get their hands on the software and run jobs for themselves,” Wilson says.

Adam emphasizes not to get too lost in trying to sell yourself at an event like an open house, and instead he urges PSPs to focus more on building personal relationships.

“For me, an open house is more about building relationships rather than trying to sell anything,” he says.

Tom believes that printers can get too wrapped up in the technical side of things, and open houses should serve as an outlet for creativity and personal connection.

The Best Ways to Prepare for a Sales Appointment